Timothy Peter Lambesis, 32, bailed out of jail after twenty-four days in custody, he had been arrested on suspicion of soliciting the murder of his estranged wife.

Documents in his court file indicate Lambesis or his agent paid $160,000 in fees as a “premium” to All-Pro Bail Bonds on May 30, 2013, and Lambesis was released the same day from Vista jail, in Northern San Diego County.

Lambesis was arrested by Sheriff’s deputies on May 7, 2013, after he allegedly gave an envelope with money and gate codes for entry into his wife’s residence, to an undercover agent who was posing as a hitman.

On May 29 and May 30, there were unexpected hearings in San Diego Superior Court for Timothy Lambesis, however the defendant was not brought into court for either hearing, according to court paperwork.

Lambesis was charged with a single felony, “solicit another to commit and join in the commission of the murder of Meggan Lambesis.”

Prosecutor Claudia Grasso told a judge at a previous bail hearing that Lambesis “is a huge flight risk.” The prosecutor also said that Lambesis faces a “maximum exposure” of nine years for the alleged crime.

Superior Court Judge David Berry directed that Lambesis must have GPS monitoring that is court approved, his passport will be retained by the Sheriff, and his travel is limited to home and work and his attorney’s office and court and a residential treatment program.

Private defense counsel Thomas Warwick Jr. had stated in court that Timothy Lambesis “was not the same person” after he began spending hours in the gym and “got into steroids.” 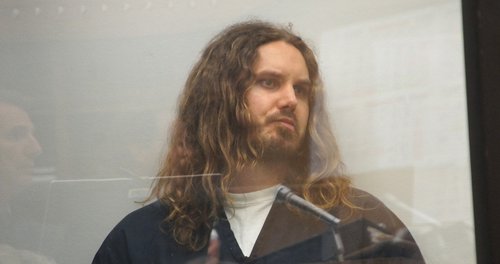 TImothy Lambesis bailed out of Vista jail on May 30, 2013. Photo Weatherston.

Earlier reports indicated that he had access to resources, and apparently he has money to use to get out of jail. ($160K isn't pocket change.) As to whether he's a flight risk, I don't know, but my take would be that he might just try to put out another contract while out on bail. Only nine years exposure? I'd have thought far more than that. Perhaps the DA can raise the stakes with a more serious charge.