Heavy metal rocker held in lieu of $3 million now, accused of ordering a hit on his wife

A judge will hear new argument tomorrow, regarding the bail amount for Tim Lambesis, who is currently held in lieu of $3 million.

Timothy Peter Lambesis, 32, who is lead singer for the band As I Lay Dying, was charged last week with trying to hire a hitman to kill his wife.

Lambesis was today granted a new bail review hearing in San Diego’s North County Superior Courthouse, according to the District Attorney’s office. The hearing is set for tomorrow, Friday May 17, 2013, at 1:30 p.m., before the Honorable Judge David Berry.

More details of the case will likely be revealed when attorneys argue their position before the judge, one trying to prevent release of the defendant and one trying to get bail lowered to a reachable figure.

Last week, a prosecutor claimed that she had a recording of Tim Lambesis specifically requesting the death of his wife. Deputy District Attorney Claudia Grasso said the defendant passed to an undercover agent an envelope which contained cash and photographs of his wife, plus her address and the gate codes to gain access to her home.

"Tim never had the intention to harm his wife, absolutely not,” according to defense attorney Anthony Salerno. “This whole thing was a set-up by a scumbag snitch, and then law enforcement ran with it.” He has characterized the case as "entrapment."

Tim Lambesis’ wife Meggan filed for divorce last September. The prosecutor has said that Meggan Lambesis is now in hiding with her three children, fearful of her not-yet-ex-husband.

“Tim will have his day in court, and when he does he will be exonerated because a jury will see that in his heart Tim is a good, decent and Christian human being," defense attorney Anthony Salerno said. The defendant pleads not guilty. 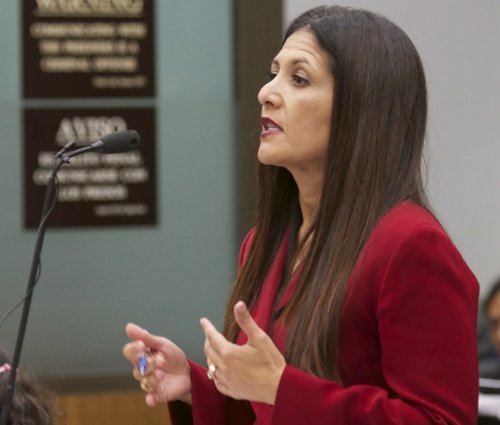