The crew over at Public Policy Strategies Inc., the lobbying outfit founded and owned by onetime GOP champion Tom Shepard, is throwing a fundraiser tomorrow for Democratic mayor Bob Filner. 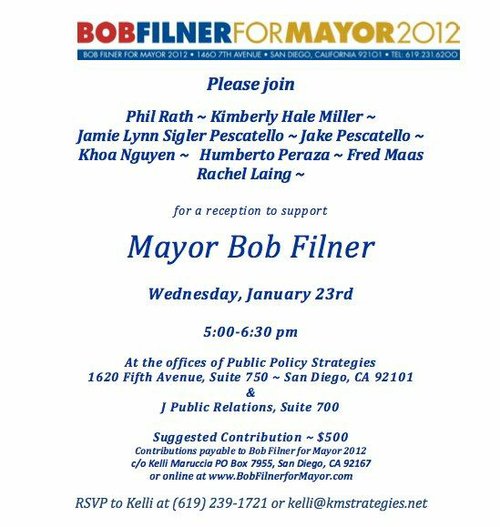 The most potentially controversial client on the firm's most recent list is Turner Construction, which is listed on the disclosure report as general contractor for the mammoth Plaza de Panama traffic and parking makeover of Balboa Park being pushed by La Jolla Democratic billionaire Irwin Jacobs. Filner has backed off earlier staunch opposition to the controversial project.

As first reported here back in October, Shepard's shop had then just picked up the business of the big contractor to lobby for downtown convention center expansion, which Filner had blown hot and cold on.

Especially interesting to some, in light of Shepard’s newly minted relationship with Filner, is a client that Public Policy reported picking up on July 10. Known as PCL-Turner JV, the general-contractor and construction-management joint venture is vying for the contract to build a mammoth addition to the city’s downtown convention center and has hired Shepard’s firm to help bag the deal.

Reached by phone Monday, Shepard said that though he has an equity interest in Public Policy Strategies, he knows nothing about the details of its operations and was unaware of the firm’s convention center lobbying contract. He added that Filner has always been opposed to the current financing plan for the center’s expansion and that further statements from the campaign regarding the issue would be released soon.

Public Policy Strategies president Phil Rath was out of the office due to illness, Shepard said, and could not immediately be reached for comment.

Absent from the current list is the Turner joint venture for convention center expansion.