Hearing delayed for woman accused of embezzling more than $5 million

A 45-year-old woman accused of embezzling more than $5 million dollars from a San Marcos company for which she was the financial controller, delayed her preliminary hearing from this week until the end of next month.

Elizabeth Ann Masters was captured as a fugitive in New Mexico last June, and was arraigned on felony fraud charges in San Diego County in July 2012.

The former bookkeeper worked for a clothing business for 9 years, during which time she forged checks to herself and purchased a horse ranch in neighboring Riverside County, according to a statement by the San Diego County Sheriff.

“Her crimes were discovered during an audit,” according to Sergeant Mark Varnau. He said the bookkeeper then “fled from California.” The Sheriff’s website now lists ten felonies charged against Elizabeth Masters.

Details of the bookkeeper’s alleged thefts and extravagant lifestyle, including purchasing more than 100 horses, were expected to be revealed this week in court. But the accused’s defense attorney delayed a preliminary hearing, he said he wants to arrange a “mental health evaluation” of the defendant.

Defender Matthew Roberts said he expects a "psychological report" will prove that his client “is not a danger to the public.”

The defense attorney suggested there might be a plea deal at the next court hearing for Elizabeth Ann Masters, which is now set for February 21, 2013, in San Diego’s North County Superior Court. 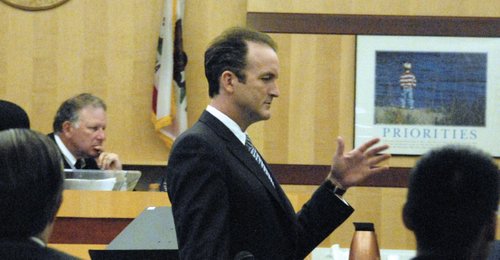 But the accused’s defense attorney delayed a preliminary hearing, he said he wants to arrange a “mental health evaluation” of the defendant

You're right, SurfPup, about them not missing all that loot. Try as I may, I cannot imagine how a local business could have that much money siphoned off and still be operating. That ain't chicken feed, folks. But every now and again I'll read how some small business was looted of hundreds of thousands of bucks and only realized it when someone from outside the business tipped them off. These embezzlers must be really good at obfuscation.

Then we learn that her attorney is a public defender. With all those millions, she does not hire an attorney? And the taxpayers pick up the tab for her defense? Something is broken here.

Vis, her $$ is long gone. Even if she still had some left the court/LE would confiscate it as fruits of the crime.