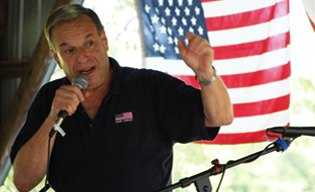 Bob Filner on the campaign trail 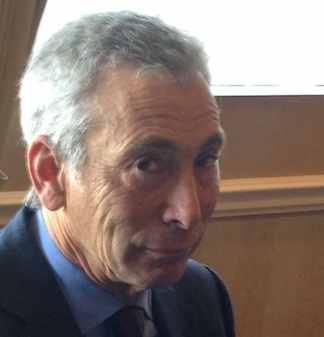 Last week, the big hoteliers voted to sue Filner in an attempt to force him to sign off on a deal negotiated by GOP ex-mayor Jerry Sanders, a major beneficiary of the hotel owners' campaign cash. To promote their case, the San Diego Taxpayers Association, a lobbying group closely tied to lead hotelier C. Terry Brown, packed council chambers.

Now comes word, via a February 26 filing posted online by the office of the San Diego city clerk, that the mayor has created the Mayor Bob Filner for San Diego Committee. Signed by Filner on February 22, the filing says the fund intends to "Support or Oppose City of San Diego Ballot Measures." No other details are provided.

According to its most recent filing, Jim Bartell's company has lobbied Filner and his aide Vince Hall on behalf of the 11th and B Investment Company, LLC, for "sale of city owned Jiffy Lube property" downtown.

Location for the 5 pm, $100 a person Filner fundraiser is Northgate Gonzalez Market at the Mercado del Barrio in Barrio Logan.

We have a call into Filner spokesperson Irene McCormack seeking more details about the mayor's new campaign warchest.

Mayor Filner is one savvy guy, and if San Diegans are smart, they will support him and his refusal to allow $ANDER$ deal to go forward...

As for Todd Gloria, good luck trying to justify your position on this since you are doing everything you can to support BIG BUSINESS over what is best for most of the people in your district!

I have absolutely given up worrying about Dr. Filner, which happened coincident with his election. We have an invisible bond. I knew that when he showed up for the Trayvon Martin march like he was applying for membership in MENSA.

Nobody needs to know about the ins-and-outs of City Hall, Matt Potter, or should I say BORIS PASTERNAK?

Aha. The only right thing, and the reason I am writing, that is, what hangs me up stuck here, is when you call this a big city. It is my belief that this city is Tijuana combined with San Diego. That makes us larger than eighth.

Anyone not on board with this idea is the person responsible for a genocide taking place here, with the corner turning on 100,000 to 1,000,000 victims. You don't think Kim Jung Un meeting Dennis Rodman means you won't get sacked after being sandwiched between exploding nuclear bombs? Aww, don't do that.

Exploring how genocides get up that high is to meet killers who absorb fifty times their own weight in blood, further indicated in a huge unseen story concerning the incidence of rape and the prevalence of rapists in our military. That is, many more rapists relocate to the military. That involves a sudden bursting through your locked door,.

We are also told to submit to the police.