UNITE HERE representatives were joined by the labor-oriented think tank Center on Policy Initiatives in a press conference announcing the lawsuit on February 25, just before the council was scheduled to meet to take comments from the public on the Tourism Marketing District before discussing a lawsuit already filed against the city in a closed session.

A driving focus of the lawsuit, as opposed to a general protest of the alleged tax, seemed to be about an attempt to tie public funds used on behalf of the industry to demands that exceptionally low wages paid to the region’s hotel workers be addressed.

“The hotel industry leaders recently said that talking about hotel worker wages was a non-starter,” Browning said at the conference. “We should not subsidize an industry that keeps its workers in poverty.”

The group argued that a “livable wage” of roughly $14 per hour for all employees was appropriate, and indicated that opposition to the Tourism Marketing District fees could be reduced or dropped if a plan to pay hotel workers living wages were in place.

Later, city council chambers were filled to overflowing and nearly 300 people filled out comment slips, with nearly a hundred making their way to the podium to speak either in favor of or in opposition to the district over the next three hours.

First to speak, detractors continued to hit on wage deficiencies as an issue while also raising concerns about the city’s potential liability if the district fee is later declared an illegal tax and alleging preferential treatment for hoteliers.

“The city should not favor one business or person over the others,” argued Jeanne Brown, co-president of the League of Women Voters. “This is one of the reasons why [the council’s November 2012 approval of the Tourism Marketing District] to favor hoteliers with the TMD, giving them control of public money, has caused you problems and will continue to cause problems,” Brown chided the council.

Richard Barrera, a San Diego Unified School District trustee, blamed low-wage industries such as tourism for creating a situation in which children come to school hungry, have a higher than normal rate of absenteeism due to illness and family issues, and are forced to move frequently, interrupting their studies.

The numerous speakers in favor of expediting the extension of district fees largely ignored the argument against low-wage jobs, instead focusing on the total number of tourism industry jobs in the region (frequently cited as either 160,000 or 168,000), providing examples of well-paid tourism professionals, and touting the benefits of the large amount of cash that flows into the region as a result of the industry.

Shawn Dewitt, president of the San Diego Brewers’ Guild, said that in 2010 his group received about $50,000 in Tourism Marketing District dollars, measuring a 3-to-1 return on that investment in the form of business generated from events the group sponsored. By 2012, he said, that return on investment had risen to 10.5-to-1 on $75,000 in grants.

“I started working as a laundry attendant, and I survived those wages,” said Guadalupe Gonzalez, a 24 year hotel industry veteran who rose to become the assistant director of housekeeping at her current job and spoke to contradict the industry detractors who bemoaned low wages and dead-end jobs. “I’m very proud to work in the hotel industry. I’ve been able to put my sons through college.” Gonzalez said she fears for her job security, however, if the district fees are discontinued.

“If we do not follow through with this TMD agreement, the Tourism Authority will be forced to close its doors after 59 years, and I will have to terminate my employees,” warned Althea Salas, the director of human resources at the San Diego Tourism Authority, the first of many representatives from that group to speak. “These are the faces, not wealthy hoteliers, who will be unemployed. You can visit them, and me, in the line at the unemployment office.”

After testimony concluded, it was apparent none of the council members were moved from their previous positions. Most of the council members commenting expressed their continuing support for the proposed 39 ½ year extension of the Tourism Marketing District, while newcomer Mark Kersey offered that, had he been on the council when the original supporting vote was taken he would have supported it and still did.

“You know, we’ve already lost five and a half million dollars in ad campaigns to promote summer tourism, so we are already losing revenue that we will never be able to recoup,” said councilwoman Lorie Zapf in supporting a push for Mayor Bob Filner to approve the fee extension. “Right now the TMD is the only source of revenue for San Diego to promote itself . . . we can either say we’re going to commit economic suicide or we have to take it out of somewhere.”

David Alvarez, however, expressed some concern with moving forward in approving Tourism Maintenance District expenditures due to outstanding questions about whether the fees charged could be found to be an illegal tax.

“I think there are a lot of questions out there as to whether this is legal or not,” Alvarez said. We’ve got to proceed carefully . . . I’m not certain at this moment that the city and taxpayers are protected, and I want the public to know that.”

Alvarez also suggested “self assessment,” a solution by which hotel owners would be free to collect fees without a government mandate in order to raise revenues to fund their own promotional activities.

City Attorney Jan Goldsmith interjected after Alvarez spoke, asserting that the district fees exist in a “gray area” while refusing to use the word “illegal” to define the visitor surcharges.

“If my office felt this was an illegal tax, we would not sign off on it,” assured Goldsmith. “Unfortunately the law, as it changed in 2010, is a little unclear . . . so my office cannot say that [the Tourism Marketing District] is illegal. We can say that it’s in a gray area.”

Meanwhile, San Diegans for Open Government announced another planned lawsuit against “each member of the San Diego Tourism Marketing District’s board, and each of the District’s officers to recover any money spent by the District in violation of either the 2007 or the 2012 district management plan. The lawsuit will be directed personally at each and every individual with any involvement whatsoever in violating either plan, which includes spending money on lawyers trying to force Mayor Filner to sign a contract with the District or on lawyers opposing any lawsuit that seeks to have the Tourism Marketing District assessment’s validity determined by a judge.” 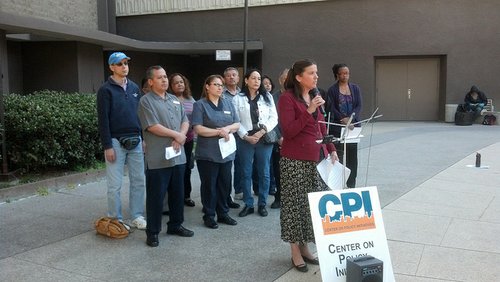 How come you didn't report the lead-off comments of activist Mel Shapiro who alleged that he held a copy of a report from City Attorney Jan Goldsmith holding that 2% TMD monies used to subsidize hotels and institutions like Sea World are in fact taxes, not fees. (If they are taxes, a public vote on their use is required.) Didn't anybody see that document?

Is this the report? http://docs.sandiego.gov/cityattorneyreports/RC-2011-36.pdf