“My sister texted him and told him,” according to witness Diana Rodriguez. “He just said, are you serious? And my sister said, yeah.”

Twenty-three-year-old Diana said that Ruben Anthony Cepeda was aware his 18-year-old girlfriend was pregnant with his child. The pregnant teen planned to name her baby boy Daniel, her sister recalled.

Cepeda is now on trial, charged with two murders for firing one shot into the belly of Viridiana Rodriguez.

Diana was with another sister named Yemely in an adjoining room in the new apartment, while Viridiana was in a room with her boyfriend, the evening of April 7, 2012. “Me and my sister, we heard a loud noise,” said Diana. She told the prosecutor she is unfamiliar with gunfire and described it as “just a loud noise.”

Diana said she and Yemely hurried to the next room. “We see my sister on the ground, face up.” Both sisters saw Ruben Cepeda put Viri onto the carpet in the bare room. “Ruben laid her down,” the witness told the jury.

“I called nine one one,” Diana said. The court recessed once for this witness to compose herself, her testimony was frequently interrupted by sobbing.

The prosecutor played a recording of the brief 911 call for the jury. It was a lot of female screaming and cries of “Hurry! Hurry up!” and “Viri! Viri!” Mostly the recording was unintelligible.

Diana revealed that she and Ruben Cepeda “hooked up…a long time ago” before her sister Viridiana had begun a relationship with the same man. Diana denied that this “bothered” herself or Viri. “Obviously not, she dated him,” Diana said, curtly.

Another witness had claimed that Diana was jealous of Viri’s pregnancy, and even punched Viri in the stomach once, at a public gathering. Diana denied this yesterday, August 26, 2013.

“It was an accident, didn’t mean to do it,” defense attorney Michael Washington told the jury of nine men and three women that the shooting was not intentional, in his opening statements August 22.

Diana testified in the trial of the man who shot her sister. Photo Eva. 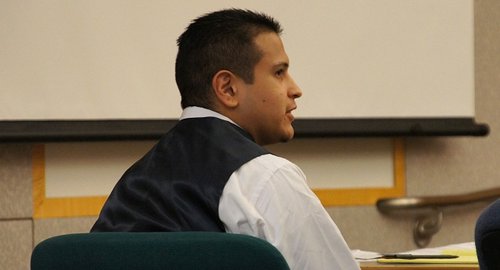