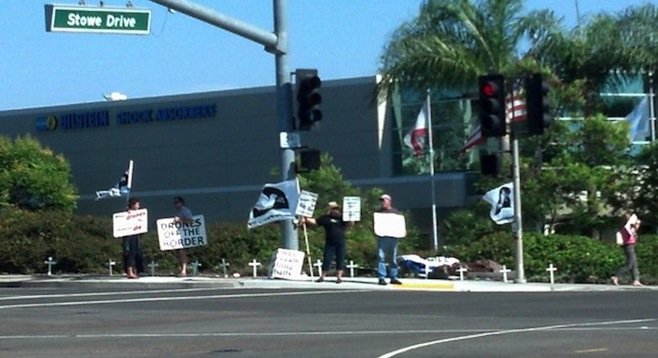 August 15 marked a milestone for a group of local protesters, as San Diego Veterans for Peace celebrated one year of Thursday afternoon demonstrations near the Poway facilities of General Atomics, manufacturers of the well-known Predator and Reaper unmanned aerial vehicles, known by most as drones.

“It seems like every time we find out something about drones, the evidence gets worse,” says Air Force veteran and protest organizer Dave Patterson, who also spoke with the Reader six months ago. His group’s focus has since expanded to take on the issue of drone use along the southern border of the U.S.

“Drones are only responsible for locating about one percent of the people that come across the border illegally,” says Patterson. “They’re ineffective, and very expensive.”

The group still stands by its earlier complaints that drone strikes are inaccurate, leading to civilian killings that do more damage to the country’s reputation abroad than they do to improve domestic security by targeting terrorists.

While about 30 protesters held banners or waved white flags bearing the Veterans for Peace logo at all four corners of the intersection of Scripps Poway Parkway and Stowe Drive (they have previously occupied a less conspicuous location at the corner of General Atomics Way), a lone counter-protester had a message of his own. 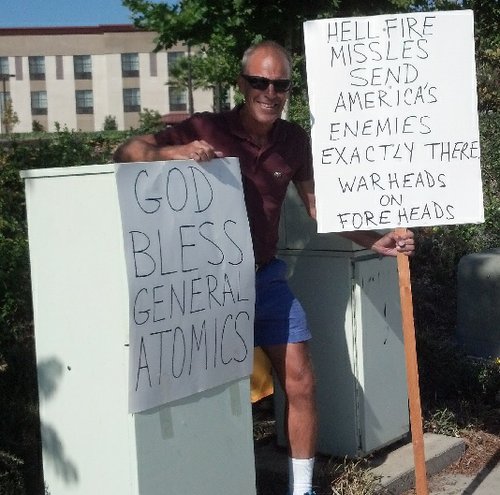 “You keep the enemy on their heels,” says Will Harvie, a physics teacher at Torrey Pines High School who showed up in support of the use of General Atomics products.

Harvie was insistent on using the less popular but more technically accurate “unmanned aerial vehicle” term to describe the pilotless bombers, stressing the fact that they are controlled remotely via video technology and do not operate autonomously, as the term “drone” implies.

In Harvie’s view, the benefits of drones, including lower collateral damage and round-the-clock surveillance capabilities, outweighed the dangers of errant missile strikes, which he downplayed as much less significant in frequency and impact than the Veterans for Peace protesters believed them to be.

I do not get the purpose of protesting the tool instead of the purpose the tool is put to. "Drones, drones, drones!", like if we just got rid of the technology behind UAVs, everything would be great. Free hint: "drone" does NOT equal armed, nor does it mean that the decision-making process behind it's use is any different than a plane,a helicopter, a cruise missile, whatever.

jnojr looks like one thing we do agree on. Drone technology puts U.S. ahead in military ability to protect Americans. Very necessary.

And precise accuracy of target has improved over time.

These protests are so ridiculous. Can't they think of something constructive to do? Time waiting and obnoxious, stupid.

its the same idea that guns are inherently bad, not the people who use them illegally. Its a tool, fool.

As usual, the press does not quite present the true purpose of the demonstration each Thursday. Of course, we see nothing inherently wrong with drone technology .... it's how the drones are used and regulated that concerns us. Many veterans believe that the current use of drones by the CIA and Air Force in Afghanistan, Pakistan, Yemen and other countries does more harm than good, and is the best recruiting tool that AQ has going for it. Once you kill a family by accident, you terrorize an entire village and send them over to the other side. Drones can be used for a whole variety of legitimate purposes (looking for lost people, legitimate security concerns) but can also be used in a variety of unconstitutional ways to allow our government to watch us when they have no business doing so. Right now, the Baptists can buy a drone and watch the Methodists, the police can watch anyone, and our laws and protections under the US Constitution are in jeopardy. Want a drone over your next backyard party ? Why not. As veterans and combat veterans from Korea, Vietnam, Iraq I and the current wars, we believe we have the knowledge and background to stand out on the corner and question what our government is doing in our name. Join us. (Member San Diego Veterans For Peace).