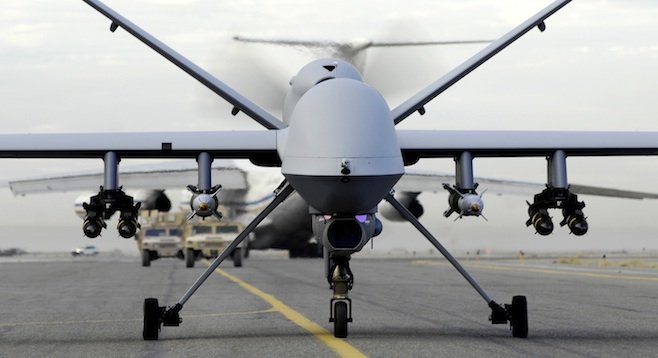 Opponents of drone use plan to descend today (November 15) on the Washington DC offices of San Diego–based defense contractor General Atomics, manufacturers of the Reaper and Predator drones flown by governments worldwide but mostly noted for their use by American armed forces in overseas theaters.

According to a report from PCMag.com, anti-drone activists will follow their protest with an event billed as the Global Drone Summit, taking place Saturday at Georgetown Law Center nearby. The conference, in its second year, aims to bring together anti-war protesters (CodePink is a major organizer), academics, human-rights activists, family members of people killed by errant drone strikes in the Middle East, and former drone pilots.

Protests are nothing new at General Atomics — a group of local activists have been picketing the company's Poway facilities weekly for over a year. And a new group, Back Country Voices, formed recently to protest the use of San Diego airspace for drone-testing programs (more on this group via the Reader in the coming weeks).

Wish these people could do something constructive. We obviously need this technology for our own protection. There are problems but are becoming more precise. If they use them here possibly instead of more helicopters, more power. What are you doing you don't want them to see? Back country thinking - but guns all over the city streets is fine?

The Blue(s) brothers are going to utterly ignore such protests. (For the uninitiated, they own GA.) Only if protests were made on their respective home doorsteps would there be any notice. And if that happened, they'd call the cops.

Those two are real "pieces of work", and normal ways of dealing with them will not have the intended effect.

Don't know of brothers. Apparently Gulf Oil is a target but I only mean that advancement in technology is going to happen and whoever has it has an advantage over those who have declared war on the US already.

And while you got me thinking- If weapons of mass destruction is what they are really protesting, if Hitler hadn't chased all the best German scientists over to America, they would have been first with nuclear capability and we wouldn't be here. Yes those tests on Japan were insane. I think there was finally an apology. Too little too late like many other of our mistakes. Since this is Kennedy's 50th year gone, I watched a Johnson clip with a reason he sent troops to Vietnam is that Kennedy would have. What?!