It's not exactly a big surprise to locals who read and tune into U-T San Diego, the mini media empire run by La Jolla hotel magnate Doug Manchester, that the long-time Republican is not a big fan of embattled Democratic mayor Bob Filner. 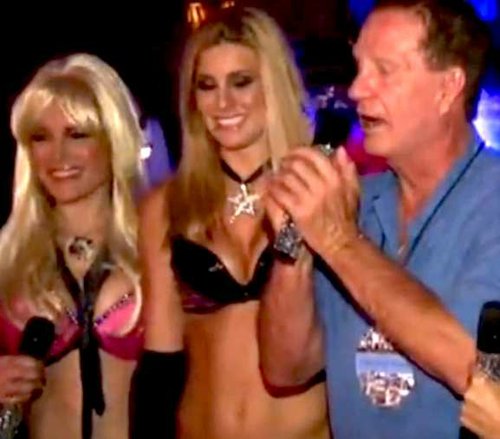 Manchester has long been GOP stalwart, going back even before the days of his favorite all time candidate, fallen mayor Roger Hedgecock, who was done in by his own political scandal, helped along with a not so subtle push by previous U-T owner Helen Copley.

Manchester currently has at least four big stakes in who is, and who may become, mayor of San Diego.

He is counting on a big deal with the city and the Navy downtown to revive his currently moribund real estate development operation here. Filner has interfered with that.

King of his birthday floor show at the Grand del Mar

Manchester is also enmeshed in a lengthy dispute with city hall over environmental violations at his sprawling Grand del Mar golf resort in the far northern reaches of the city, as Dorian Hargrove has been chronicling here over the past months.

In addition, the Republican has wanted to loosen billboard and sign regulation to assist his media expansion plans. Filner has proven to be no friend of the outdoor advertising industry, which has thrown a phalanx of contract lobbyists against city hall in a so far failed effort to free up regulations.

And as a big resort hotel owner and reputed appreciator of wine, women, song, and hotel rooms, Manchester has a huge stake in the battle by the city's top three lodging moguls to undo Filner's reforms of the city's hotel promotion subsidy program.

Now, as the drumbeat sounds for Filner's scalp, the publisher’s Manchester Financial Group has kicked in $5,000 to the San Diego county Republican party.

According to a filing made by the GOP and posted online by the California secretary of state's office yesterday, the cash came in on July 30, the day after U-T reported the newly minted Filner recall movement.

When you already have more money than you know how to spend, why all this endless creeping around trying to make that extra buck? It's unseemly.