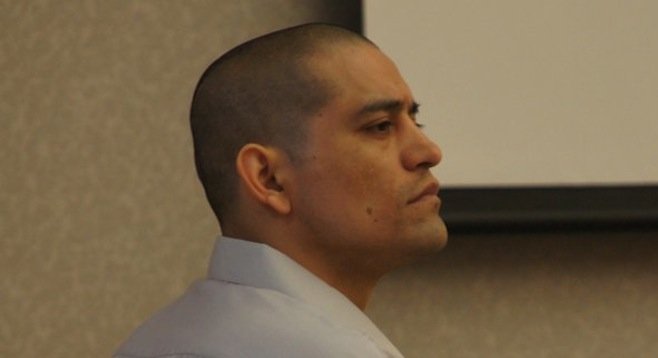 An Escondido man who caused the death of a passenger in his car when he drove head-on into another car, was sentenced to 45-years-to-Life in prison today.

Jose Raul Najera told paramedics he was high on heroin when he drove a stolen car in Valley Center a year ago, on April 25, 2012.

Deputies were in pursuit and witnessed Jose Raul Najera cross over to the wrong side of the road. San Diego Sheriff’s deputy Nathan Rowley said he saw a “mushroom cloud of plastic” when the cars collided, after a pursuit which lasted less than sixty seconds.

The stolen Ford collided with a Subaru driven by a 76-year-old woman; she survived to testify at trial, and came back to hear sentencing today.

Thirty-two-year-old David Lopez, a passenger in the stolen Ford, died of blunt force trauma to his chest, according to a county medical examiner.

Public defender Mignon Hilts had told the jury, “Mister Najera made some bad decisions that day” but he “is not a callous murderer.” The defense attorney asked the jury to find the defendant guilty of manslaughter.

“Given the defendant’s criminal history, this was an accident waiting to happen,” said deputy district attorney Laurie Hauf. The prosecutor claims Najera has seven prior felony convictions in San Diego County, including two “strike priors.” The prior offenses began the year Najera turned 20, these include burglaries, theft, drug and gang crimes. 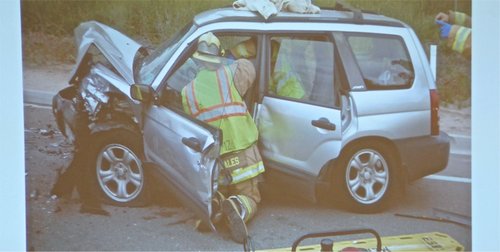 Emergency responders were able to save the elderly woman in the Subaru. Evidence photo.

Wow. I didn't think it was in any way possible to turn a traffic crash into a 45 year sentence. Not that I object, mind you. It has been an area of laxity in our laws for years that allowed some really egregious driving in a most negligent manner to go lightly punished. And, of course, the defense, who should have plea bargained it down to a stiff manslaughter sentence ends up making the most lame of excuses which didn't work. Don't mess with our Vista juries! They are tough folks--mostly retirees with a heavy sprinkling of old Marines.

It's true this jury came to unanimous verdicts quickly. But I understand it was the judge who decided to get tough in this case, the Honorable Kathleen M. Lewis declined to "strike the strikes." That is to say, she did not ignore the perpetrator's prior record, but instead added on the additional penalties demanded by California voters and legislators.

So, are we to take from this that the "three strikes" law is alive and well--when the judge decides to invoke it? That's hardly what the voters and legislators wanted; they wanted those stiffened penalties to apply to all miscreants all the time. I suppose we should be grateful for the fact that at least one judge is tough on the real bad ones. But, if she does this sort of thing often, the defense attorneys will jump through all sorts of hoops to avoid having their cases tried by her.

Prosecutor Laurie Hauf got special recognition for her work on this case, by the San Diego County DA's office and the Board of Supervisors. The District Attorney's office released a statement this morning, October 9 2013, saying that prosecutor Hauf's "outstanding contributions to public safety" were recognized by the county board at a meeting yesterday. Bonnie Dumanis also remarked on Laurie Hauf's "dedication." There were seven other deputy district attorneys who also received special "proclamations" at the Tuesday board meeting. 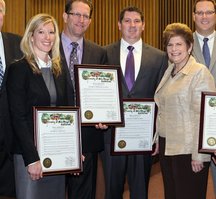