Fresh from a dust up over the price of campaign ads sold to favored San Diego candidates, UT San Diego publisher Douglas Manchester is throwing a political fundraising lunch next month at the Headliners Club on the fifth floor of the headquarters of his Mission Valley newspaper. 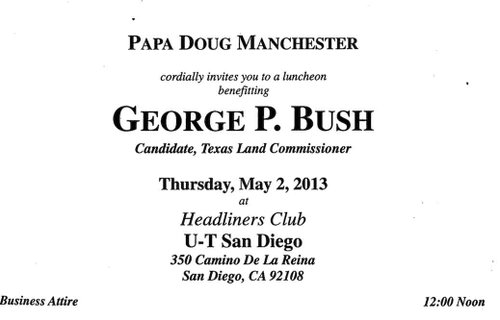 The candidate of the hour: George Prescott Bush, who last month announced he is running for Texas Land Commissioner. The tab for the May 2 event is $1000 a person, according to an invitation from "Papa Doug Manchester" recently dispatched to hoped-for San Diego supporters.

Bush's mother Columba, a naturalized U.S. citizen, was born in Mexico, and backers are touting him as an ascending star among conservative Hispanics who can help the GOP recover lost ground with Latinos. Fluent in Spanish, Bush is a lawyer and deputy finance chair of the Texas Republican party.

Traditionally a sought-after stop along the path of many Texans seeking higher office, the job of land commissioner is "the oldest, continuous elected position in Texas history," according to a state website. The spot dates back to the Texas Revolution of 1836, when the Republic of Texas was established after the defeat of Mexico.

"Currently, the Commissioner is responsible for managing billions of dollars of state assets, investments and mineral rights. He also serves as Chairman of the Texas Veterans Land Board and as chair of several other key state boards and commissions," the site says.

As previously reported, La Jolla's Manchester, long a major supporter of the GOP, and his son Douglas W. Manchester are developing a large hotel adjacent to the convention center in Austin, where he has retained a lobbying firm with campaign funding ties to Republican governor Rick Perry.

The newspaper has also warned of threats to California's economy from Perry, blaming California Democrats for unfriendly business conditions here.

I don't recall Irwin Jacobs saying that business conditions in CA have made it difficult for Qualcomm to prosper. An even richer billionaire, David Geffen, has no plans to move to TX. P.S. Friends don't let friends move to Texas!

Geez! Didn't America fight a revolution to prevent this country from becoming another dynastic empire?! Funny (or not so funny) that billionaires who quote our founding fathers keep trying to impose their will (and profit-making agendas) on voters. George Washington warned us about forming political parties in his farewell address because they would: "Serve to organize faction, to give it an artificial and extraordinary force; to put, in the place of the delegated will of the nation, the will of a party, often a small but artful and enterprising minority of the community . . . They are likely, in the course of time and things, to become potent engines, by which cunning, ambitious, and unprincipled men will be enabled to subvert the power of the people, and to usurp for themselves the reins of government; destroying afterwards the very engines which have lifted them to unjust dominion."

This needs changing: "No other serious challengers have filed to run against George P. Bush in 2014."

This is nothing more that spreading their BIG money around so that ever more can donate the legal limit from a distance!

We are seeing US Politics being sold to the highest bidders/donors.

Too bad George P. Bush does not serve in the Military like his grand pappy!