The hotel’s cleaning lady went to tell her manager that the man in room 104 was standing at the window overlooking the courtyard “without any clothes on.” The hotel manager reportedly went to room 104 and asked the man to leave and told him she would refund his money.

But when George Louis Norman, 73, followed the manager back to the hotel lobby, things only got worse, according to the cleaning lady. She said she could smell alcohol about the man.

“When he came to the lobby he asked for his money back,” the cleaning lady told a Superior Court judge this morning. She said the man was “very angry” and called her a “Mexican bitch” and other “bad words.”

With the aid of a Spanish speaking interpreter, the cleaning lady described a violent episode in which the man threw a glass vase at her and spit on her “twice.” This caused the hotel manager to dial 911, she first used a phone on the wall, but the man reportedly ripped this phone from the wall and threw it at the women as they retreated to a locked room behind the hotel lobby’s counter. The hotel manager used her cell phone to dial 911 again.

Sheriff’s deputy Kimberly Nicholson testified that it was a little after 3 on a Sunday afternoon when she responded to a call for assistance at Cardiff-by-the-Sea Lodge on Chesterfield Drive, August 19, 2012. The deputy said she noticed a broken window at the hotel’s lobby when she approached, and a hotel guest told her she witnessed a “grey-haired man” kick the window three or four times until it broke.

The deputy said it was after 5 p.m. when she found George Louis Norman seated atop an electrical box at the corner of Highway 101 and Chesterfield. When the man was asked what he knew about an incident at the Cardiff Lodge, the deputy said he replied, “Fuck that fucking Mexican bitch.” The man was removed from the electrical box, and while deputies were trying to go through his pockets, “He began kicking backwards in a mule style kick.” The man did not respond to requests to “stop resisting” and another patrol deputy who had arrived took George Louis Norman “to the ground,” deputy Nicholson said in court today.

Public defender Mary Gaines stated at the end of the preliminary hearing, “I don’t think this case rises to felony conduct.”

Superior Court Judge Robert Kearney noted for the record that the defendant has two felony and two misdemeanor prior convictions, and then ordered George Louis Norman to answer three new felony charges of assault and vandalism and resisting arrest, and one new misdemeanor battery charge. The 73-year-old defendant is currently held in lieu of $30,000 bail and is next due in court October 9. 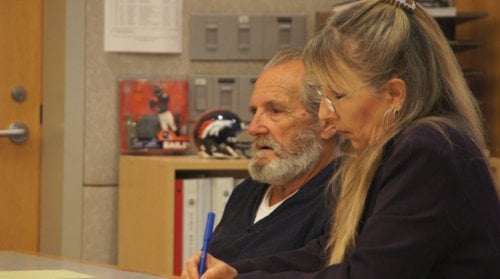 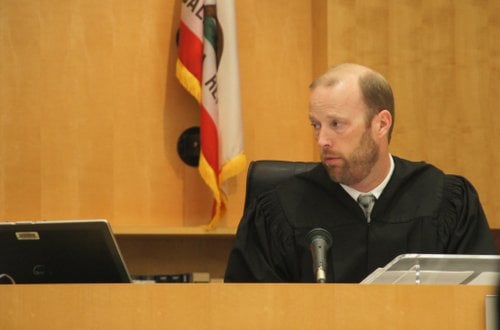