Wealthy sole heir to a once-powerful newspaper chain, he presided over its dismantling

David Copley, the sole heir to the Copley newspaper chain of his adoptive father, has died in a La Jolla car crash, the newspaper formerly known as the San Diego Union-Tribune reported tonight.

Copley, 60, apparently was the victim of a heart attack while driving an Aston Martin near his La Jolla home and crashed. He died later at Scripps Memorial Hospital, says the U-T San Diego account. Copley received a heart transplant in July 2005.

Copley had a tumultuous personal and professional history, having inherited the Copley print empire just as the newspaper business was massively disrupted by the rise of the Internet.

"Helen Copley died on August 25, 2004, at Foxhill, the sprawling French Provincial estate in La Jolla built by her late husband Jim," we wrote in February 2008's Rise and Fall of the Copley Press. 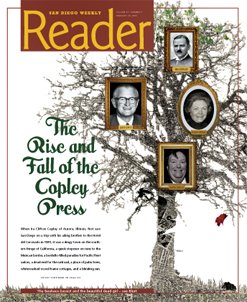 "She was 81. Her only child David, then 52, was born after Helen fled to San Diego following a quickie marriage and divorce from his father in Iowa, apparently to give the child a name; Jim Copley adopted David in 1965, immediately after marrying Helen.

"At the time of her death, Helen had long since settled her legal disagreement with Jim Copley’s two adopted children from his first marriage, who sued for fraud, claiming she raided their trust fund. The agreement was secret, but it was clear they were out of the company for good.

"David was his mother’s only apparent heir. She named him chairman and chief executive of the Copley Press and publisher of the Union-Tribune in 1997.

"For years, rumors swirled through the Union-Tribune about the state of his health. A huge man with a baby face, Copley was famous for his drinking bouts and the extravagant parties he threw. He had been repeatedly arrested for drunk driving, in one case doing a week at a county labor camp after being picked up weaving down a street near his La Jolla mansion in his Porsche."

"Though it wasn’t acknowledged by the paper, the U-T rumor mill had it that Copley’s heart was bad, caused by his weight and indulgence in food, drink, and perhaps other substances. Then, almost a year after Helen’s death, the U-T announced in July 2005 that he’d had a heart transplant."

“'For me, of course, this is wonderful news,” Copley said an email message attributed to him by the paper.

“The surgeons and their team at Sharp Hospital in San Diego did a magnificent job. Indeed, over the last two years, they literally have saved my life several times. Thanks to their skill and the scientific advances that make their work possible, I can look forward to many years of renewed vigor and productivity.” 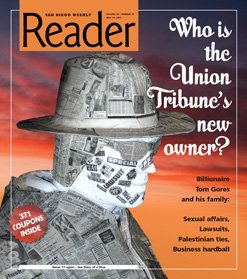 Who cares. Spoiled rotten rich kid that never worked a day in his life.

Whatever the feelings are about David Copley, this is not the time to make negative comments.

He was never in good health, and he was not cut out for running a newspaper, for whatever the reason/s.

Having said that, he did spread the Copley/HIS wealth around and made life a better place for it.

How come in this era of openness, no one says that David Copley was gay? Didn't he himself ever acknowledge that fact? Also, since he sold the U-T, didn't he live most of the year on a huge yacht anchored in foreign ports?

Matt, any word on what will become of his assets???

The U-T San Diego obit on David was most curious. I'm not sure you could call it an encomium, but it did sound like something that would have been written about him if he had still been the owner/publisher of the paper. No, there was no mention of his sexual orientation, and only a fleeting comment about his time spent in the Mediterranean. That means they neglected to mention his $33 million yacht and the cost of its upkeep. There was a time when the Copley Press was talking poor-mouth, and yet he appeared in the society pages of his paper with the "beautiful people" on the Riviera. But it did describe his home and that of his mother, both in La Jolla. And finally, there was no mention of his "fire sale" of assets in recent years, dismantling the media and cultural empire of his father and mother. A truly tragic figure. As SurfPup says, RIP.

The assets will probably go to a charitable foundation that will be set up in Copley's name. I'm sure Andrew Shelton will receive enough money to live on. Copley's maids and domestic help will probably receive some cash to shut them up. The executor will probably fire the yacht crew ASAP to preserve the estate's assets and put the yacht up for sale. The Copley family ancestral home, Foxhill, will probably be sold to a developer and razed. A developer could subdivide the property and build 10 or more luxury estates and make a tidy profit. I don't know if Copley left any money to his half-brother Michael. My guess is the bulk of his wealth goes to a foundation for the arts with a modest annual stipend for Shelton.

I'm not aware of him ever acknowledging he was gay. And without any confirmation, I'm not sure how any reporter could say he was. Rumor and hearsay are not sources.

A reporter could spend time trying to find someone to confirm it, but reporters hopefully have better things to do.

It's interesting that everything I've read about David Copley since his death is either "pro" (his philanthropy) or "con" (his self-indugence), but no one seems to remember the moment that defined his true character.

And what did David do after he took over the paper? In an act of supreme ingratitude, he fired Morgan - "Mr. San Diego," an award-winning journalist and civic booster who changed the course of Helen's (and therefore David's) life.

I think it's a waste of time to discuss all the ways that David Copley wreaked havoc in his own life. The firing of Neil Morgan was the defining moment that showed the true nature of his deeply flawed character.

But wasn't David just a puppet, a figure head?? He NEVER made the business decisions or day to day operating details of the UT/Trib.

Apparently he did make business decisions and give editorial direction.

Here's a piece from The Reader about Morgan being fired in 2004. http://www.sandiegoreader.com/weblogs...

Another longer piece about Neil's firing is here: http://www.sandiegoreader.com/news/20...

You make a good point. Morgan was a very interesting guy, and not always an honest journalist--his boosterism of San Diego was often over-the-top--but he deserved better from U-T top management. A graceful retirement of the old boy was in order, not a dismissal.