FINRA also suspended Frederick Bothner of Carlsbad for a year. He will pay a $10,000 fine. Without admitting or denying FINRA's findings, Bothner consented to sanctions that he improperly requested and in some cases permitted another person associated with his firm to complete online courses for him.

The California Board of Accountancy put Brian Agnor on probation for three years. He had failed to report to the association that in 2010 he had a misdemeanor conviction for indecent exposure. The next year he was convicted of reckless driving with measurable blood alcohol.

one more sleep 'til ur birthday pooh bear

have a very HAPPY one Don 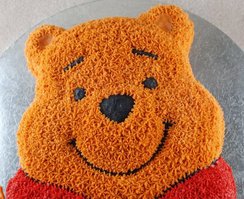 Maybe I won't be able to sleep. Best, Don Bauder

My pic is back up? I didn't know that it was down. Best, Don Bauder

My birthday excitement is catching mice and chipmunks in traps, putting the corpses on the porch, and then watching as the ravens swoop in and take them away. Pretty pedestrian stuff. No swinger I. We will go out to dinner tonight. Best, Don Bauder

u don't have to be a swinger to have fun Don...u and ur wife have a nice dinner and FUN tonite

STOP REFUSING TO HAVE FUN!!!

and leave those chipmunks alone

take her dancin' and do that snugglin u talked about

When my wife was young, she adored chipmunks. But they are eating everything she plants now. So we have to get rid of them. But they just keep multiplying. Best, Don Bauder

they ate all my Holland tulip and daffodil bulbs so i know how u feel...BAD SCAMPERERS

so do u keep flowers or a garden...they're happy to eat either

But if we don't kill them, will the ravens starve? Best, Don Bauder

u have me on the horns of a dilemma here Don

maybe seeds would work 4 both 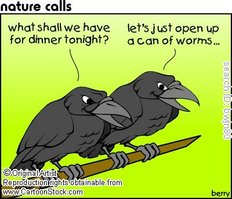 the chipmunks would love them 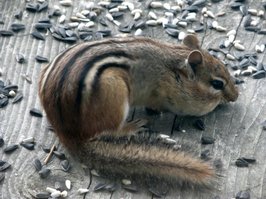 Last winter, a cow elk fell and died on our property. The vultures were already gone for the winter. But the ravens were still here. We noticed that the coyotes wouldn't come take a portion while the ravens were there. The coyotes were afraid of the ravens. Eventually, the corpse was picked clean, but it was interesting watching how the different creatures behaved. Best, Don Bauder

raven are voracious messengers... bringers of the understanding of dark destruction into the light...

in the Northwest the Raven is one of the totems of the Makah tribe...

Raven, like Mink and Coyote and other spirit beings of the Northwest mythology, is as fickled and unpredictable as nature and its seasons.

Raven is a shapechanger, who can assume any form - human or animal. Raven is a glutton and trickster, but he showed pity for the naked people(the Makah) he found in a giant clamshell. His trickery brought them the essentials for existence in a harsh world -

game and fish and fowl, fire, clothing, shelter - and with them the rituals that would protect them from the dark spirits lurking about.

Raven stories are both entertaining - as Raven's mischief often backfired, but also instructive - teaching us about the Northwest Indians' way of life and the origin of their customs.

i would make a friend of the Raven..but not offer chipmunk sacrifices to it...let it find it's own food Donnie...hahahahahahahaha

hey fisherman...i'm not going to be able to nibble on ur hooks this PM....hahahahahahaha...perhaps tomorrow

did u know that Ravens are Americas largest songbird??

Oh, they are big -- enormous wingspan. My favorite songbird is the meadowlark. Best, Don Bauder

lovely birds...and they have such sweet voices

The child whispered, "God, speak to me" And a meadow lark sang. The child did not hear.

So the child yelled, "God, speak to me!" And the thunder rolled across the sky But the child did not listen.

The child looked around and said, "God let me see you" and a star shone brightly But the child did not notice.

And the child shouted, "God show me a miracle!" And a life was born but the child did not know.

So the child cried out in despair, "Touch me God, and let me know you are here!" Whereupon God reached down And touched the child.

But the child brushed the butterfly away And walked away unknowingly.

have the monarchs migrated thru yet?

i hope u remembered how to bow correctly smartypants

oh i have a new pet name 4 u...smartypants

"Smartypants" is close to how others describe me. They say, "You have your head up your rear end!" Best, Don Bauder

How many apples did you eat today, Caesar? "Et tu, Brute." Tht's the kind of day I have had. Best, Don Bauder 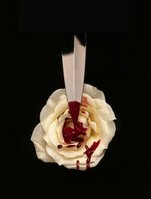 i had 1 apple...yes a Caesar salad with balsamic vinegar and ginger dressing and sliced chicken breast u brute!!!

i used the sharp knife on the chicken

Are you calling me a brute? Most call me chicken. Best, Don Bauder