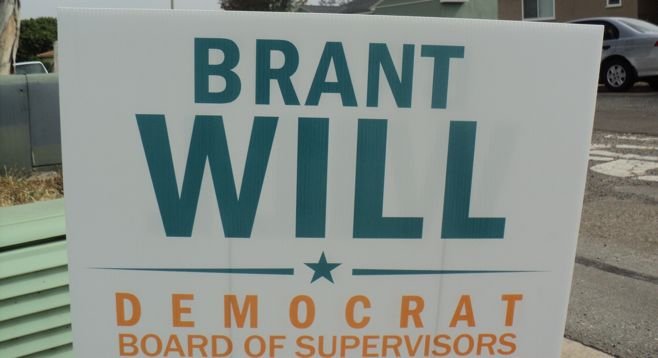 County Supervisor Candidate Brant Will — Hanging on to Idealism

Campaign signs for County Supervisor Greg Cox have proliferated in Chula Vista for several months, but there was a rare sighting in the city last week — a Brant Will sign. Cox and Will are facing off June 5 for a District 1 supervisor's seat.

In a May 20 interview, Will said, "The campaign is going pretty well, all things considered. I have signs up in Point Loma and Chula Vista; I hope to have signs up in Imperial Beach and Coronado next week."

Will said, "It's tough to run a grassroots campaign against a 16 year incumbent who has built up lots of good will with millions of dollars of donations to charitable organizations." Will is referring to, among other things, the controversial slush fund, also known as Neighborhood Reinvestment Program, that county supervisors have dispensed in a discretionary manner. Will said his point should not be confused with whether these organizations deserved the award, "as most of the groups were worthy organizations."

Will says one of the many issues he would like the chance to address is the county food stamp program. County supervisors have accrued a lot of criticism because of the inefficiency of the program. A February City Beat article documents problems with gaining access to the county program dating back to 2003. "Even if you're so callous that you don't care about children or old people going to bed hungry at night, you should care about passing up $100 million a year in federal benefits that could be spent in the county of San Diego."

When asked why his campaign signs state that he is a Democrat, Will said, "Anyone who believes this race is non-partisan is naive." All of the five county supervisors are Republican. District 1 has more Democrats than Republicans.

"I'm trying to hold on to my idealism," Will opined, "but being a candidate has been an experience." One of the things that has surprised him is the lack of support from some Democratic Party officeholders. He faults them for having "narrow, parochial interests" because "they're either beholden to or want something from Supervisor Cox."