Nearly three weeks after city councilmembers, sans Sherri Lightner, gave the $45 million Plaza de Panama project the green light, Irwin Jacobs and the construction management firm he hired to be in charge of public outreach and planning are patting themselves on the back for a job well done.

KCM Group issued a press release today touting their role in the project aimed at removing traffic from the Plaza by building a bridge from the Cabrillo Bridge that leads to a 797-space parking garage behind the Organ Pavilion.

"The Plaza de Panama project could not have made it to this point without the expertise and diligence of Gordon Kovtun and KCM Group," said Irwin Jacobs. "The team they put together was instrumental in achieving project approval."

Missing from the release was any information about the two-year long battle with historic preservationist group Save Our Heritage Organisation and like-minded residents over what they called destruction of a national historic resource as well as any mention of a possible lawsuit.

The release did reveal some information on the timeline for construction to begin. The relocation of utility lines is expected to begin in October of this year. The project, according to KCM, will be complete by October of 2014, "in time for the 2015 Centennial Celebration in Balboa Park."

Well, a lot of people praised the design and construction of the Titanic too.

I betcha the Propaganda Release didn't mention the very long list of opposition, including the National Parks, the National Trust for Historic Preservation, our very own State Preservation Office, Caltrans, the Committee of 100, the Women's League of Voters, 4 of 5 planning groups in Todd Gloria's district, etc. etc. etc. - funny (or not) that the Jacobs Folly or off ramp to Nowhere but a PAID Ace Parking Garage in the middle of the National Register Balboa Park had national, state and local opposition...

Reminds me of the old Marx Brothers line, "...who do you believe me or your eyes" (who do you believe, Jacobs & Sanders, or the Truth - that the Folly is the worst thing to ever happen to San Diego)...

Also, betcha the Propaganda Release didn't mention the possible SOHO lawsuit that WILL delay the Folly for quite awhile..... 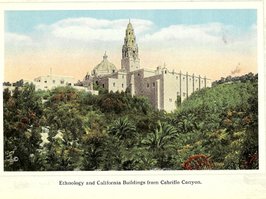 I cannot believe the City Council approved this dim-witted, short-sighted, moronic idea. It just goes to show, just because the majority of professional organizations and knowledgeable individuals are against something, doesn't mean you cannot still buy your way to a favorable decision. It has to be the money. Why else would anyone go along with this half-baked, misguided nonsense? Historical accuracy? They'd have to change a helluva lot more than the pedestrian walkways to bring Balboa Park back to what it was in 1915 or 1935. That is certainly not it.

I still have yet to read anything that provides a clue as to what Jacob's interest is here. Where is Jacob's dog in this fight? Dorian? Don Bauder? Anyone?

After his hired guns prevailed in the city council chambers, Irwin praises them. Anyone surprised? This old guy who was making such friends a few years ago with his largess (such as over $100 million to the Symphony) is becoming more partisan with every passing day, and is going to buy his vision for the park, come hell or high water. What else might he have his sights on? We can only wonder and wait.

Javajoe, if you look back in the Reader comments for the past few months about this "plan", you will find plenty to read that could start to explain his motivation.

Personally, I am beginning to think that Jacobs is losing it. Rather than making friends as he was two or three or five years ago, he is now creating legions of opponents or enemies. That wasn't his style. Maybe he's running out of time and is at an age that he doesn't give a rat's a** about that others think. But he's leaving a legacy for himself and his wife that may just not be what he thinks/hopes/desires.