An attorney who admitted taking funds from two trust accounts has failed to make a single restitution payment, and recently requested a jurisdictional transfer to another county where she has a new home, according to documents in her court file.

Both victims expressed outrage that Gregory took advantage of them when they were “most vulnerable.” The former Carlsbad attorney had specialized in family law practice, and reportedly took money from accounts of clients she was representing in divorce proceedings.

The California State Bar stated “this court agrees that disbarment is the appropriate level of discipline” for Gregory, after they reviewed her case, and published their findings in March 2011.

The disgraced attorney admitted the thefts in January 2012.

A judge had ordered restitution payments to begin October 2012, at $500 per month to each victim.

Prosecutor Sherry Thompson complained that “defendant has not yet begun to make one restitution payment” in papers she filed in San Diego’s North County Superior Courthouse, last week. The prosecutor also noted, “It appears the defendant has filed for bankruptcy protection.”

Last month, Judge Robert Kearney granted Gregory’s request to reduce her monthly payments to $50 per month, retroactive to October and November and December 2012. The judge ordered Gregory to begin paying the $500 per month amount starting in January 2013.

Last week, Judge K. Michael Kirkman granted Patricia Ann Gregory’s request to reside in San Bernardino pending review of her request for jurisdictional transfer. Gregory has been at liberty on probation since September 2012.

Prosecutor Thompson filed opposition papers, stating that a transfer is inappropriate because it would result in “significant hardship on the victims in enforcing their rights.” Deputy DA Sherry Thompson stated it is “much fairer to put the burden” on the embezzler, to travel for court hearings.

Patricia Ann Gregory has another hearing set for June 17, 2013 in San Diego’s North County Superior Courthouse, but her “presence is waived” if her restitution payments are current, according to court documents. 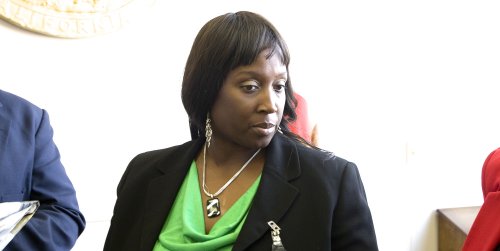 Where is she getting the restitution money????

Maybe from investments she made with the victims money.

Troll Patrica Gregory will be going back to jail soon. From court records we see Gregory is pulling off the old con game again. This time conning the probation office. There has been a change of probation officers and hopefully the new PO will see through this con's fraud and put her back in jail for the remainder of her year sentence. I wonder if this felon is still practicing law again without a license? BTW Jerry Brown is a moron and should be impeached.