As speculation mounts over how new mayor Bob Filner will handle the billionaire Spanos family's push for a taxpayer-subsidized Chargers stadium, a movie screening in Sacramento tonight may shed some light.

"Knife Fight is about sex, drugs, money and how politics is really played - a knife fight in a telephone booth, where blood is spilled, low blows are common and the best candidate is not always the best person," says a blurb about the new flick, starring Rob Lowe.

An invitation to the premier - a benefit for the Sacramento Press Club at the historic Crest Theatre in the heart of the capital's K Street lobbyists' district – adds, "Mingle with the stars and SPC supporters during the pre-movie wine and heavy hors d’oeuvres reception."

Movie-goers will also no doubt get more than a glimpse of the screenplay's inspiration and co-author, Chris Lehane, the consulting partner of La Jolla's Mark Fabiani, the Chargers "special counsel" who has long been beating San Diego bushes for new stadium cash. 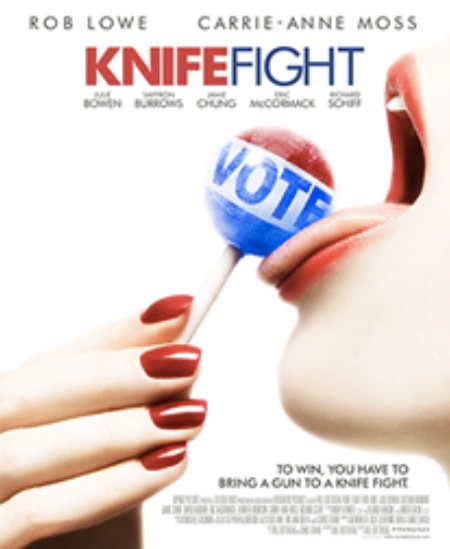 Known as "masters of disaster," the team has handled controversial clients from Current TV (after the Al Gore-founded enterprise fired Keith Olbermann) to cyclist Lance Armstrong to Madonna to the Clinton White House.

When we first wrote about it last fall, Lehane's picture, shot in San Francisco, was being billed as a comedy about a "political crisis manager."

Tonight's isn't the first presentation of the film. It was screened in Charlotte during Democratic National Convention week in early September, preceding the California Democratic Party Gala, according to an invitation.

I hope Filner doesn't have to bring a gun to the knife fight; I think all he needs to do is keep his ol' Buck good and sharp and gut this stadium plan as soon as they try to hang the taxpayers with the bill. I just hope he has the stomach for it.

Filner isn't gutting anything, he is going to bend over backwards to give the Spanos Crime Syndicate whatever they want......

Agreed. Anyone who thought that Filner was going to be something other than another episode of the same old establishment system is already being disappointed, and will be far more disappointed before this is over.