The Mexican Mafia has put the word out for Hispanic street gangs to stop battling each other, to “focus on getting the blacks out” of their territories, according to an Escondido police gang specialist.

Detective Erik Witholt said it was a couple years ago that police started hearing from contacts on the street about the new directive. Detective Witholt gave testimony in a hearing for alleged gang member Ulysses Ocampo, 22, who has been charged in two separate knife attacks in Escondido that occurred in February of this year.

Ocampo denies being the man who attacked a group of friends hanging around a parking lot in front of a pizza place, near the corner of Rose Street and East Valley Parkway. The group, described as black and “mixed race” by witnesses, was reportedly waiting for their pizza dinner when a Hispanic male approached. The stranger announced a gang challenge — “Where you from?” — and then punched one man and stabbed another, witnesses said. A group of five Hispanic males rushed the group while the first attacker reportedly jumped into the driver’s seat of one witness’s gold 2003 Saturn and took off — but the carjacker soon jammed on the brakes and demanded the woman in the backseat with her three-year-old child “Get the fuck out of the car!”

Detective Witholt said he spoke to the stabbing victim at Palomar Hospital, where he was recovering after surgery, “He told me that he got stabbed in the chest.” The alleged victim was unsure if the weapon used was a knife or a screwdriver, but he was able to identify Ulysses Ocampo from a photo lineup, Witholt said.

Surveillance cameras from a nearby business assisted police in identifying Ocampo, who has been a documented gang member since 2005, when he would have been 15 years old. Ocampo has the word "DIABLOS" tattooed across his chest, is a “self-admitted” gang member, and is known by the gang moniker “Grumpy,” according to Witholt.

A week later, on February 13, a dark-skinned man of “mixed race” said he was moving into his new apartment in Escondido when he was approached by a man he later identified as Ocampo. The stranger asked, “Where you from?” and, “You’re not one of those Crip or Blood faggot niggers, are you?” before he announced, “This is Diablos” and, “We don’t want no niggers in our 'hood” and then punched his new neighbor in the face. The attacker pulled out a knife, according to this witness, who said he managed to escape without being stabbed.

Ocampo was arrested after a chase through backyards and over fences the night of February 14, 2012, by officer Nicholas Rodelo, a six-year-veteran of Escondido’s specialized Gang Enforcement Team.

Ulysses Ocampo has a record in San Diego County dating from 2007, including two alleged prison “priors,” and is scheduled to be formally rearraigned on a dozen new charges April 26, in the Vista courthouse. 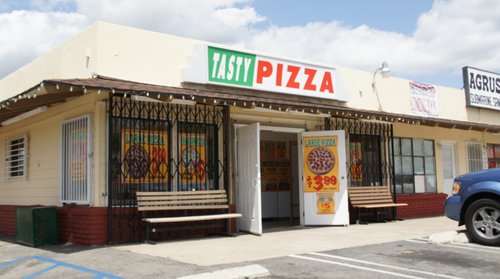 One attack was allegedly in this parking lot. Photo Bob Weatherston

Ocampo has the word "DIABLOS" tattooed across his chest, is a “self-admitted” gang member, and is known by the gang moniker “Grumpy,” according to Witholt.

It would seem he has been justly named.