"At the end of the contest," James Kruk says, "I was taking a photo with Linda Thompson, and she whispered in my ear, "You were my favorite."

That's a big statement, considering that James 'King' Kruk is an Elvis impersonator from North County and that Linda Thompson is Elvis' former girlfriend.

"Linda also said that I have Elvis' sense of humor and that I wasn't trying to be Elvis, but that I was doing a terrific job of paying homage to Elvis."

In May, Kruk took second place honors at the Las Vegas Ultimate Elvis contest. "They do it sort of American Idol style, with the judges commenting after each performer. The judges were Thompson, her brother and former Elvis body guard Sam Thompson and a performer who does a Michael Jackson tribute."

Kruk says this was his fourth year in the competition. "I wasn't going to do the contest but Legends in Concert sent me an email saying I could still enter."

Kruk can, and does, all three Elvis eras in his night club act. "I did all 70's Elvis in the contest."

Thompson's judging comments to Kruk: "My Way just doesn't get more authentic than that. You have the same vibrato as Elvis, and the same demeanor and stage presence and sincerity as Elvis. There was only one Elvis but you come pretty darn close."

King Kruk came home with $300 dollars in prize money. Kruck says first place and $2,500 dollars went to Chad Givens, "who changed his name to Chad Collins for the contest."

Kruk does not feel at all bruised by his landing in second place. To the contrary: "What second place means is respect on the world stage. It means that I am one of the top Elvis Tributes in the world. It means California, and not only Vegas has world class Elvis entertainment." 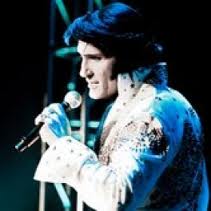 The King Kruk of rock and roll