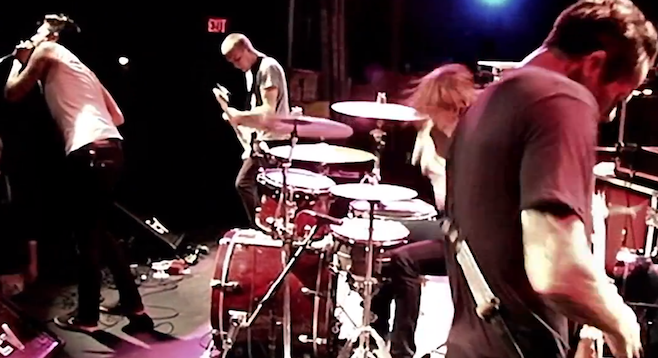 Also, the Locust reunite to join Yeah Yeah Yeahs at I'll Be Your Mirror in London

Remember when the Che Café was the wildest venue in town? When weird hardcore bands would dangle from the rafters and people dressed up funny and everyone lost themselves in a sweaty whirlpool of faces bobbling spastically to the honks of Moogs and the wailings of guitars?

Maybe it was because I was around 17 at the time and I didn’t know any better. Maybe I’m just old and jaded and incapable of the cathartic Tuesday night releases of yesteryear. Or maybe, as the esteemed psychedelic philosopher Hunter S. Thompson once posited, “All energy flows according to the whims of the Great Magnet,” and these periodic disturbances in the Force are simply fundamental vacillations of that vast metaphysical claw pulling strings behind the scenes of all things in this manifest world.

Whatever the case, I miss that shit, and on Wednesday, March 20, Che is opening a portal back to that mythical Aztlán of the adolescent heart with a showcase of some of San Diego’s finest freaks who never really grew out of being loud and offensive and perpendicular to everything your mother ever told you (except, perhaps, the ontological implications of flatulence on Mars, for all you Jr. scientists out there).

Seven bucks get ya Retox (who recently signed to Epitaph Records):

Retox - "Congratulations, You Are Good Enough"

Innerds "Who Farted on Mars?" live on Larry Bus

Fair warning: The Locust (members of Retox and Innerds) will be playing at I'll Be Your Mirror in London on May 5.

Imagine my surprise for being scolded by the lead singer of retox for voluntarily moshing with other people who were also voluntarily moshing! I certainly was not being overly aggressive or involving people who clearly were staying out of the way, yet just before the last song jp decided he needed to let me know i was being " a 14 year old at my first show, alpha-male , cro-magnon," and so on, ending with how he hated being "the parent" at the show. Some of the stupidest stuff i've heard at a show, especially coming from the lead singer, especially when I was just trying to amp up the crowd, ESPECIALLY when there was only 30 people at the show. once again, i was only moshing with people who were voluntarily moshing already!

so i'm sorry to say that the glory days of some of the wildest bands playing the wildest shows are gone, at least if you see bands like RETOX. now if you see a band like TERROR, who played just a few short months before, you get an entirely different story. (youtube link to that very show... http://www.youtube.com/watch?v=hPy2UsnxR6o )

so if these guys feel like sh*tting on their dwindling fans, don't be surprised when they are ancient history! As for me, I'll stick to bigger bands playing better music who DON'T bigtime their fans. yup, that's pretty much the long and short of it!