On Wednesday, March 6, Club 1979 (first and third Wednesdays) presents perhaps the loudest lineup The Office (3936 30th St. – North Park) has seen since it was the comparatively rough-and-tumble Scolari’s Office.

Maniqui Lazer put Mexicali’s then-bustling experimental punk/hardcore scene on the map with their April 2006 debut I Learn Everything on TV.

“We were the only ones that were making our own sound,” keyboardist Valentin Torres says about the band’s salad days playing alongside fellow Mexicali innovators Lipstick Terror, Deadly Squad of the Deadly Rhythm, X=R7, and Noise Beat Propaganda.

“Since we're a border city, our sound was like a hybrid of Mexico and USA. At least, that’s what I like to think.”

Maniqui Lazer went on an indefinite hiatus after their 2008 self-released LP The Amazing Kingdom of the Animals in the Zoo.

Both Torres and bassist Rodo Ibarra appeared as guests with Mexicali post-rock outfit Letters From Readers.

Maniqui Lazer made a comeback last November at All My Friends music festival in Tijuana, and rumor has it that they have a new album in the works.

Maniqui Lazer at All My Friends 2012, Tijuana

Just a few days after the Office gig, the experimental dance punks will be appearing at Festival Nrmal 2013 in Monterrey, Mexico alongside Ariel Pink’s Haunted Graffiti, Twin Shadow, King Tuff, and about 100 other acts.

Vocalist Carlos Quintero played with members of Maniqui Lazer in Lipstick Terror, while the rest of Batwings grew up in El Centro, playing and attending shows on either side of the farmland frontera. 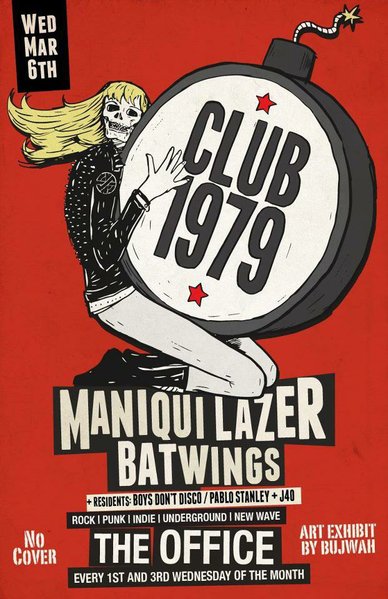