East county painter captures the essence of rock and roll's past

Of the subjects that appeal to fine artist Jessie Buddell, only one of them is still alive. That would be Grace Slick. So far, the rest are Jerry Garcia, Jim Morrison, Tommy Bolin, Keith Moon, Johnny Cash, Jimi Hendrix. She's made portraits of each.

"She's a Woodstock hippie that was born too late," explains her boyfriend Dave Madden. Indeed - with her straight blond hair, suede coat, jeans, and tennis shoes, she looks the part.

And she loves classic rock. "Whenever I paint anything, it's always to music."

Slick is captured in one of Buddell's collage-construction-paintings as a young adult during her salad days with the Jefferson Airplane and possibly buzzed on something exotic, judging by the additional imagery that floats about Slick's rendering. The hookah-blowing caterpillar from Alice in Wonderland, for example.

Buddell's day job is as a design illustrator. She lives in Casa de Oro with Madden, the former drummer for Wild Child, a Doors tribute band.

"She designed the Snow Buddies," Madden says, Snow Buddies being a kind of collectible figurine that was mass-marketed.

"I love the blues," she says. "Without the blues, there would be no rock and roll or rhythm and blues. But I had to research a lot of those guys. You have to know a lot about someone before you can paint a portrait."

The research paid off. Actor Dan Aykroyd owns one of Buddell's life-size blues portraits: Albert King, complete with a real flying 'V', a type of guitar King was known to play.

Buddell's images are all like that. They are dimensional in that they include cutouts and real props. Jimi, for example, is playing an actual white Stratocaster not unlike the one he played at Woodstock.

Buddell points to a thumbnail image on her web site of her Robert Johnson portrait: "That's a real guitar and a real cigarette."

When she left the O.B. gallery, Buddell switched from painting blues stars to painting rock stars. The current images are stunning and life-like reminders from another era. Does she channel the subjects in some way in order to capture their likeness? Not really. "I just play music really loud."

Buddell is from Pennsylvania. "I've been doing art from day one, but I didn't start painting until Junior high school." She flew out her to visit a friend when she was 24. "Like most people who do that, I said, I have to live here." Ultimately, she did.

She'd like to plan a showing of her classic rocker collection. "My problem is that [when it comes to business] I'm not very far sighted. I think I need about five more paintings. Now, I'm really thinking more about painting a whole band. Led Zeppelin. The Who. The Yardbirds."

Buddell says she arrived at the 3-D look of her rock star art because she wanted the images to look like they were "popping out. It kind of invades your space," she says. "You love Jerry Garcia, you love the painting, you buy it, and you hang it in your home, and you kind of feel like Jerry's sitting there with you." 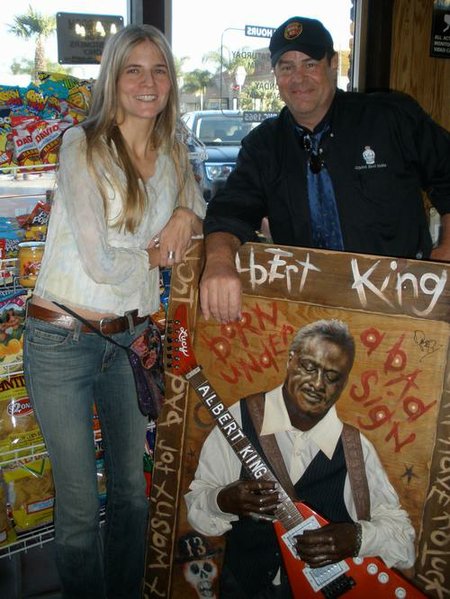 Jessie, Albert, and Dan in Oceanside in 2009. Dan kept the painting.