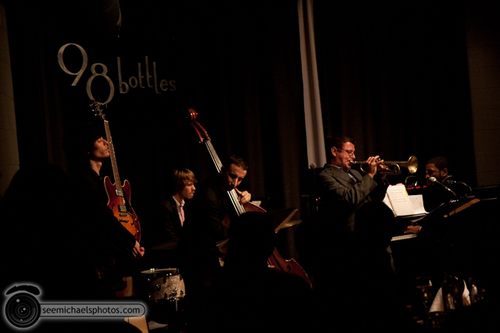 Young double bass master Danny Weller has returned from NYC, bringing his band-mate guitarist Jeff Miles back to town as well, where they will be hooking up with LA drummer Jens Kuross and San Diego pianist Joshua White for a concert under the aegis of Third Story, the band Weller founded to explore music in the tradition of the iconic German record label ECM four years ago.

These guys performed here last March, and it was a sensational concert that drew a packed house at 98 Bottles. There's is a special chemistry brewing when they play, and on Sept. 21, Third Story will reprise their earlier appearance with two sets in The Back Room.

Weller and Miles moved to New York to expand their music careers, and I asked Weller how it's been going.

"NY has been fun!," said the bassist. "After being constantly on the road for my first year and a half--I am now committed to staying in the city, for better or worse. The strong presence of so many accomplished musicians, not to mention all of the players my age working as hard to make a name for their music, has been a constant and necessary source of inspiration to me."

Weller was a busy cat when he lived here, playing with trumpeter Gilbert Castellanos and recording with UCSD Professor David Borgo's intricate free-jazz ensemble Kronomorfic among many others. I wondered how the gigs are coming in The Big Apple.

"I recently began to play on an off-Broadway production of Maltby & Shire's "Closer Than Ever," a musical review, [and] since our CD Release in March, Third Story has enjoyed a handful of performances in NY. Our most recent show was at Small's in the Village," Weller said.

So, how's it feel being back in town?

"Being back in San Diego is like a weight lifting off my shoulders. I'm in heaven. My personal checklist of important restaurants to re-visit has almost been completed, [and] Saturday night is my high school 10-year reunion, which I'm also very excited to attend. One thing I forgot about being a musician in San Diego was the capacity to smile and have a good time up on stage. NY is a very serious place to make music, and it's easy for me to forget sometimes about the importance of enjoying what I do."

Third Story will be performing two shows at 8 and 10 p.m. The Back Room fills up early, and based on the last time they played, I'll be arriving early.