I live in my dream world. A lot of my songs come from dreams.

Sharon DuBois and I have been talking for a half hour or so at Cosmo's in La Mesa. I excuse myself, tell her I'm off to the next appointment, and she says this: "Don't you want to ask about my songwriting process?" Which I thought we had been discussing. And in this single moment of clarity I fear that I have likely missed something subtle but of of importance -- troubling to any journalist.

A couple of days later, DuBois posts the following on Facebook and links it to me, so I'd see it, I suppose:

Writing music, for me, isn't this light hearted, tra la la, happy go lucky affair... it's not a joyful event. It's more like getting the flu and purging, or a heavy day of therapy at the shrink's office. I once did a past life regression that lasted about 3 hours... it's more like that... Intense focus, concentration and soul ripping that could last anywhere from 3-6 hours with days or months of prep before hand. So, I write the song, and then, I have to learn it... Then when all that is finished the Joy (sic) comes.

Growing up in Canada, I was taught always to question.

I want to describe DuBois as a jazz singer (she gigs with Joshua White and John Staten among others,) but she is not totally a jazzer. She has a stunning high range that is both clear and heart-wrenching in the manner of Billie Holiday, but although she is heavily credentialed in the idiom, DuBois is a wild card singer/composer who mixes pop and funk tonics in a blend she calls urban cross-over.

Add to that her jarring ideas, such as incest or water-boarding.

"It's incongruous," she says of the water-boarding song. "I love that it has a good groove -- I love to dance. It catches your attention. I like to evoke thought, to challenge people, and people," she says, "don't always want to be challenged."

I ask her how that's working out career-wise and she laughs and says not so well. "I don’t get a lot of gigs. People want to go out, and they want to have a cocktail and relax."

DuBois talks about the difference between artists and entertainers. "As an artist," she says, "I'm true to my art. But I am working on being more entertaining." She then looks out the window and describes a dream she had that instigated the move to the West Coast of the United States. It was a Thelma-and-Louise moment of resolution: DuBois was in a car that was headed for a cliff.

"Instead of crashing, in the dream the car gained altitude and it went over the ocean. I took that to mean I should move to San Diego."

That was in 1990. Prior, DuBois studied at the Eastman School of Music in Rochester. She sums up the experience in this way: "They taught classical. I'm a jazz singer." In San Diego, she earned a Bachelor's degree in cultural anthropology with a minor in American Indian studies. She will not tell me her age. She resembles a feminine (and much younger) Steve Perry, who was once the singer/front man for the band Journey which seems both to amuse and flummox her. I switch gears.

Music, I ask, or words? Which comes first?

"Music first. Generally, yes." She says she writes on either piano or guitar. The words come later.

People ask me if I was molested.

"No," she says. "And I wasn't water-boarded, either." She explains the origins of her powerful concepts, for example, a jittery song called "Suicidal Sister."

"It was developed from a lot of what I overheard people saying at Take Back the Night" (Take Back the Night, also called Reclaim the Night dates back to the 1970s and is an internationally held march against sexual violence and rape.)

DuBois says that she writes when it comes to her, that her source material includes dreams and emotional experiences. She'll be going into the studio before the end of the year. "I've been wanting to introduce some new songs."

She talks about the process and reveals that she is better as a band leader. "I have tried to be a side man, but my phone doesn't ring. So I have to create it. I have to work a lot of hours to pay the musicians."

DuBois works by day in the holistic health field, doing body work and massage, which she says is another story entirely but that in various ways is also relevant to her work as an artist. 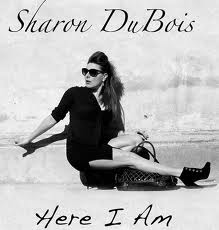 New music coming before the end of the year: Sharon DuBois

Thank you Dave! You have big ears (it's a compliment in the jazz world ;)