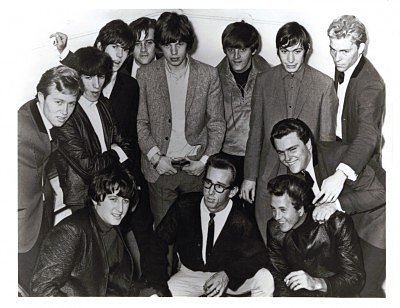 11-1-64 – the Rolling Stones made their first San Diego appearance, playing an evening show at Balboa Park Bowl, having appeared that afternoon at Long Beach’s Civic Auditorium, aka Long Beach Arena. Tickets cost $3.50, with the show starting at 5:00 p.m. Various local acts opened, including Joel Scott Hill and the Invaders, Rosie and the Originals, and famed local garage band the Misfits.

The show's promoter Danny Millsap, who ran a local record store, told the Reader in an April 1998 article that he paid the Stones $400. “I remember paying Rosie and the Originals $500,” he recalled of booking the popular local group known for their hit song “Angel Baby” (later recorded by John Lennon).

Only around 300 people were in the San Diego audience that Sunday, despite the Stones having drawn around 13,000 earlier that day in Long Beach., and 5,000 the night before at San Bernardino’s Swing Auditorium. On Friday, they had headlined the famed TAMI show at Santa Monica Civic Auditorium, alongside James Brown, Chuck Berry, and the Beach Boys.

Reportedly, the gates were essentially abandoned and anyone in Balboa Park who happened to wander by was welcome to walk inside and checkout the show.

“We figured what the Hell,” says Millsap. “We had made everything we were going to. Might as well let everyone enjoy themselves…I think I lost about 500 bucks on that show. It was no big deal. The kids had a good time.”

Danny Millsap’s son David, a high school junior at the time, recalls “Because the crowd was so small, you could actually hear what the Stones were playing…they sounded better that night than any time I’ve heard them since.”

Local opening act The Misfits featured future Moby Grape singer/bassist Bob Mosley. “We played a lot of places around town,” he recalled in a 2005 interview, “but [the Stones show] was the biggest thing we’d done.”

At the time, the Misfits were signed to Imperial Records, whose roster included Ricky Nelson and Fats Domino. Their single “This Little Piggy,” released just before the Stones show, was appearing in Top 30 surveys for radio station KDEO - which hosted the Stones concert - as well as at KCBQ and KGB.

Another opening act, Joel Scott Hill and the Invaders, featured drummer Willie Kellog, who recalled that day and meeting the Stones backstage for an April 1998 Reader article. “They were just these frail looking little guys with gray skin. They don’t get much sun over there in England, you know…they weren’t talking to anyone. Mick Jagger was sitting in a corner by himself…he was p-ssed off about money or something. He was afraid they weren’t going to get paid. They didn’t sell many tickets.”

As for the Stones’ set, Kellog says “We were laughin’ at those guys. Jagger was doin’ all this jerky sh-t, singin’ the blues with that heavy English accent. That band was hitting a lot of clams, man. There was just a lot of wangin’ and dangin’ going on up there.”

The day after the San Diego show, the Rolling Stones recorded at RCA Studios in Hollywood for the first time. They taped the songs "Pain in My Heart," "Everybody Needs Somebody to Love," "Hitch Hike," "Heart of Stone," and "Down Home Girl." 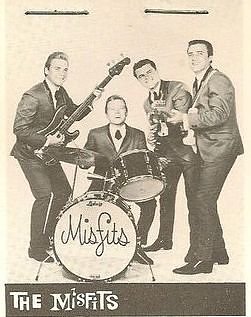 As for the Misfits, in December 1964, after a gig at the Red Coat Inn (5933 University), the band travelled up near San Francisco to record some studio demos with Sylvester Stewart (Sly Stone), but little came of the sessions. The band split in 1965 after guitarist Earl Steely married and refused to tour. Bob Mosley stayed in San Francisco and joined Moby Grape.

However, Mosley hit on hard times after Moby Grape dissolved amidst years of lawsuits. “I was living in the bushes alongside a San Diego freeway in 1996,” he recalled in 2005, “when a friend picked me up and told me Judge Garcia in San Francisco had agreed to give the Moby Grape name back to the band, instead of the corporate suits.” The partially reformed Grape occasionally performs and records today.

Another act who opened for the Stones that day, National City-based Rosie & the Originals, hit #5 on the Billboard Hot 100 In mid-December 1960 with their song “Angel Baby," remaining on the charts for 12 weeks. Singer Rosie Hamlin wrote the lyrics while a 14-year-old student at Mission Bay High School. Hamlin was 15 when the band self-recorded the song at a San Marcos facility.

“It was actually an old airplane hangar,” recalls Hamlin on her website. “The owner had airplane parts all over the place…he had a corner set up with recording equipment.

“We took one of our 45s to Kresge’s department store in San Diego,” Hamlin recalls. “They had listening booths in their music section where you could preview records…we asked the manager to play our record, and see if he could sell it in his store.”

A rep from Highland Records was in the store that day and the label soon signed the group and released the single. However, Highland insisted that bandmember David Ponci get songwriting credit, since he was the oldest member. “I do not own the rights to the song,” says Hamlin, “but I did obtain the copyright in 1961. Now, I do get the B.M.I. [payouts] and part of the publishing.”

This concession took over 20 years of lawsuits to obtain. “[I] got burned, like so many of our peers in those days,” says Hamlin.

John Lennon cited Hamlin as one of his favorite singers in a 1969 Life magazine interview. He recorded “Angel Baby” in 1973 for an aborted album of classic cover tunes, although the track didn’t appear until his 1986 album Menlove Avenue (it also appeared on a posthumous Lennon box set).

Today, Hamlin lives in New Mexico. She's no longer making public appearances due to her ongoing battle with fibromyalgia.

A terrific photo of the Stones onstage, shot by Jan Tonnesen, can be viewed at http://www.flickr.com/photos/63092108... 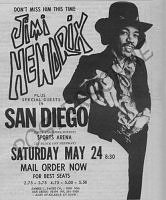 THE DAY NIRVANA PLAYED OFF THE RECORD: 10-24-91 - Detailed inside story of the day Nirvana played the tiny Off the Record store… http://www.sandiegoreader.com/weblogs...