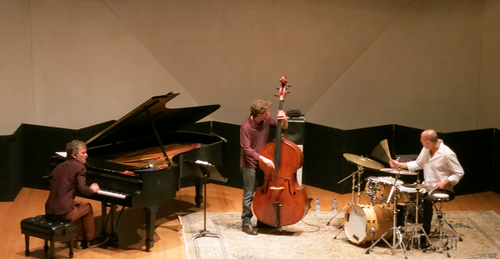 The Athenaeum Jazz at the Neurosciences Institute series continued last night with a bang: the long-awaited return of the Brad Mehldau Trio, a concert that had been sold-out virtually since its announcement a few months back.

For a jazz lover, it was actually kind of a thrill to stand in a line long enough to prevent making visual contact with the concert hall.

Joining Mehldau were the top drawer rhythm section of Larry Grenadier on double bass and Jeff Ballard on drums.

The pianist remembered the absolutely pristine acoustics of the Neuroscience room and made the unusual choice of performing without amplification for the piano and drums.

"Brad told me, this is one of only two rooms in the country where he can do that," said Dan Atkinson, director of Jazz Programming for the Athenaeum.

It was an experiment that went exceedingly well, save for the inadequate amplifier used by Grenadier. It was simply too small to provide enough depth to capture his magnificent sound in the louder ensemble passages.

Ballard made a convincing case for placing his name on the short list of drummers qualified to ascend the throne held by master musician Jack DeJohnette-- when he chooses to abdicate, that is. His ride cymbal intricacies and subdivisions of time were perhaps the most remarkable aspect of a pretty remarkable affair.

Next up was the beautiful Sam Rivers classic, "Beatrice," Grenadier led off with an astonishingly limber and muscular solo that combined great speed with notes that were held and caressed. Mehldau followed, building short phrases into longer ones--always keeping space in between. The clarity of Ballard's cymbals in this mainly acoustic setting were something to marvel at: each "ping" was distinct--and the waves of energy created by his super-relaxed posture sent chills up my spine.

There was a kind of Keith Jarrett vibe going on with "Sanctus," grounded by a bluesy left hand figure, and building into an insistent vamp--and a mind-boggling display of complexity in "Ten Tune," which featured long unison passages between bass and piano. Mehldau took an a cappella solo turn that was nothing short of dazzling. Streams of melodic information flew out of his hands, which occasionally crossed over for a startling effect.

Mehldau has always had an appreciation for pop tunes, and the pianist chose a new Paul McCartney ballad, "My Valentine," to close the concert. Pastel harmonies were grounded by Grenadier's protean bass lines--yielding to a powerful and bluesy bass solo that is till ringing in my ears. Mehldau put his own stamp on the ballad with pointed stabs and drunken trills while Ballard continued to amaze with his cymbal artistry.

Another highlight concert from Atkinson and the folks at Athenaeum Jazz.

Photo by Katie Walders, of the Athenaeum Music and Arts Library.