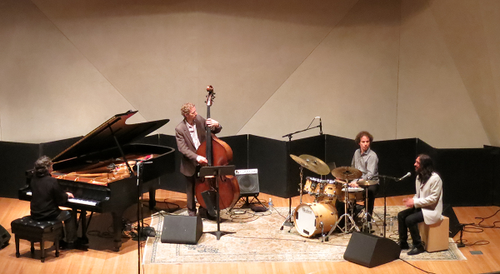 You've got to hand it to Dan Atkinson, the Jazz Program Coordinator, and the rest of the folks at the Athenaeum Jazz concert series. Each Athenaeum production, whether it's held at the Music & Arts Library, The Studio on Park Blvd. or the plush auditorium at the Neurosciences Institute-- is first class, all the way.

It starts with the selection of artists-- top-flight musicians from New York,or Europe, mostly, and continues with the listening experience. There are always informative programs, friendly volunteers, and pristine acoustics, regardless of venue.

The concert began with Dominguez crafting his template for the evening: a rubato, solo introduction, eventually arriving at the juncture in which Street, Prieto and somewhat later, Cordoba would join in. The pianist opened with an original, "Marcel," written for his son. The introduction was full of reflective lyricism and heavy technique. A vamp yielded to a measured bass exploration by Street, in which each note could be heard and savored. Dominguez built his solo out of increasingly oblique ornaments of the melody, many of them laced with bluesy asides. Prieto began stirring up the heat with bass drum accents, tom-tom thwacks and rim-shot chatter, until the band drew the volume down to a whisper.

There were remarkable highlights, such as the recasting of "Flamenco Sketches," which featured the pliant melissma of Cordoba, done with a grainy vibrato that seemed to float around the harmonies. Cordoba also fired off a series of wicked handclap syncopations, heightening the flamenco effect.

"Blue In Green," received a similar, elastic treatment, beginning with rippling piano arpeggios that swelled into waves of sound. Cordoba sang with raspy glissandi to dramatic effect over the pulsing whole notes of Street and the swirling brushstrokes of Prieto.

"All Blues," came stumbling out in 7/4, led by the funky, loping bass ostinato of Street, who took the first solo, steeped in the blues while avoiding clichés. Prieto exploded with a drum solo composed of hissing hi-hat, click-clack rim-shots, and thunderous drum rolls. Dominguez' solo showed how well he has synthesized the influences of Bill Evans and Keith Jarrett, fusing them into a pure sound aesthetic that had the house Steinway singing.

After the crowd demanded an encore, Dominguez and company delighted with an out-of-the-box rendering of Ahmad Jamal's classic "Poinciana," featuring a totally reworked bass line and ethereal harmonies.