With just 9 days left to source the second half of his $5,000 Indiegogo goal, one-man band Toothless George will be hosting a fundraising show to cover printing costs for his pending book, Band Together: The Definitive Entry Level Guide to Forming a Rock Band.

The 200 page opus includes advice from prominent voices in the music industry, including record label owners, music venue employees, recording and live sound engineers, and members of The Ramones, Danzig, The Dead Milkmen, The Distillers, The Unseen, Screeching Weasel, The Dwarves, Downspell, The Angry Somoans, Turbo A.C.s, and others.

“It has nothing to do with marketing or getting famous,” Toothless George told The Reader in October.

“It has everything to do with being a team — walking into a club at the lowest level and understanding what’s expected of you. A lot of young bands want to be famous, tour in a jet, all of that. They go after that goal and fizzle out ahead of their time. I’m writing this book to give them the foundation they need to succeed. I still see bands on the national level making the same mistakes, like walking around the club all cocky. Ten people came to see you. Shut it.”

Toothless George is a former pro skateboarder and is best known musically for his involvement with The Halflings and The Percocettes.

He is also the author of the “Revenge Tactics” column in Wonka Vision Magazine and the novel Angel of the Aegean. 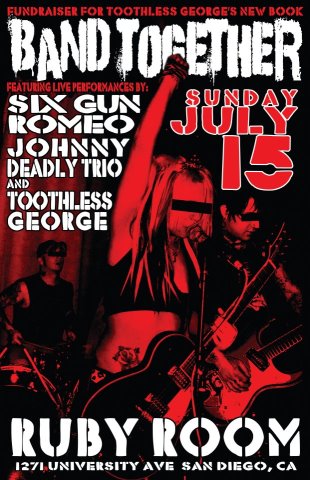