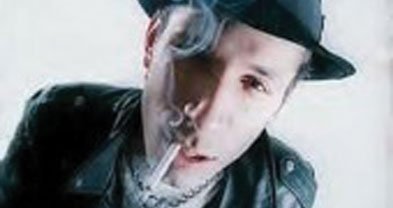 “I’m a punk rocker,” says one-man-band Toothless George, who is best known for his involvement with the Halflings and the Percocettes.

“I play some country and rockabilly stuff, but I’m a punk rocker. I’m not some singer/songwriter hippie. I’m a band. Every show is different. I don’t practice. Whatever I feel like playing, I play. Tons of covers, tons of originals. I tell people, ‘If you come expecting musical genius, you’ll leave. But if you come looking for a good time, you’ll have a great time.’ I wish I was rich enough to have a video camera, because once it’s done, it’s done.”

Inspired by one-man-band Hasil Atkins, Toothless George plays simultaneously a guitar, tambourine, guitar, bass, snare drum, harmonica, and sings. With 23 years, 40 albums, and thousands of shows in the U.S., Europe, and Japan under his belt, the 36-year-old is writing a book called Band Together, which includes input from members of Screeching Weasel and Danzig and is meant to inform young musicians on how to function effectively as a band and with venues.

“It has nothing to do with marketing or getting famous,” says Toothless George. “It has everything to do with being a team — walking into a club at the lowest level and understanding what’s expected of you. A lot of young bands want to be famous, tour in a jet, all of that. They go after that goal and fizzle out ahead of their time. I’m writing this book to give them the foundation they need to succeed. I still see bands on the national level making the same mistakes, like walking around the club all cocky. Ten people came to see you. Shut it.”

The former pro skateboarder is also the author of the “Revenge Tactics” column in Wonka Vision Magazine and the novel Angel of the Aegean.

Says Toothless, “If people team up and put the work in, they’ll succeed.”