"I want the bad music night to function as a 'safe' space for anyone who wants to perform some material that is new and might not work at all. The audience is expecting you to be bad from the start, so that is a much different kind of atmosphere to enter as a performer," says Sean Francis Conway, curator of the new series. The performances take place on the stage of the Victory Theater, which functioned as a church since the 1960's. That is, until 2011, when the Center for Amusing Arts started doing events there, according to the Victory Theater's website. 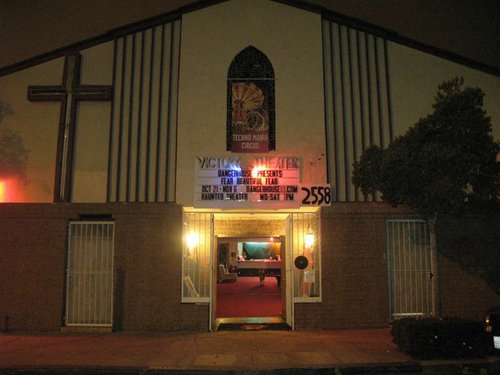 Conway explains that the night involves "Soloists, in a quiet theater, with bright lights. There is no booze either, so it is going to be a pretty charged setting."

Set to occur the first Monday of each month, tonight will see Sasha MC $alsa Surr3ndah Syeed (Nothingful) hit the stage. He has been publicly announcing (on the Facebook event page) plans to rap about Mexican food. Speaking about himself in the 3rd person, he writes, "Sasha Nothingful Syeed will be debuting his new 1-man-hiphop-crew/freejazzQuintet/ world music band, MC Salsa Surrender. This will possibly be the only time I perform my brand new composition which I just envisioned on my walk home, 'Taco de Cabeza.'" He later changed the spelling of his project. 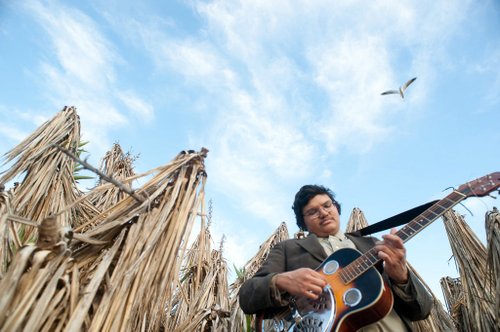 Also performing will be Randy Chiurazzi, who plays guitar with his Sound-Suit, among other objects. Chiurazzi's experiments in sound date back to his residency with Robert Fripp and the League of Crafty Guitarists, from 1985-1987.

Conway will be performing as well. A music teacher and graduate of the Berklee College of Music, Conway recalls a similar musical experiment saying, "I did a piece surrounding bad music with some Juilliard classical players and they generally played tons of notes, loud, and didn't listen to each other when they were told to play bad. That's pretty interesting because it sounded good, I think." 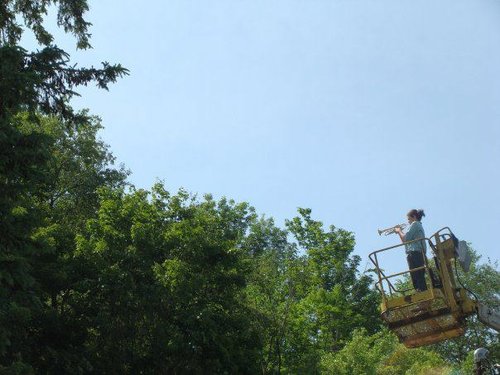 Sean Conway on a crane with his trumpet

Hey that's VICTORY THEATER at 2558 Imperial , not Liberty though they have the same number of syllables...... Dr Techno

Got it, thanks Dr Techno - up all night with the flu does strange things to the mind.