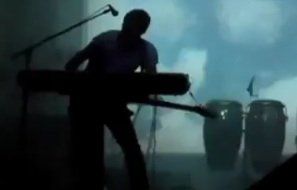 A Scribe Amidst the Lions vs. Mexican Glass Jumpers and Commie Ghosts

A Scribe Amidst the Lions debuted their new La Escalara Records split 7” with south of the border buddies Sour Soul in Mexico City earlier this month, an adventure wrought with near death experiences, loss of personal property, Communist hauntings, avant garde buskers, and celebrity treatment from locals.

“We had a staff of three guys filling our drinks and lighting our cigarettes,” says bassist Bobby Roquero of their December 2 gig at Mexico City’s Salón Covadonga.

“They rushed us through the crowd to the VIP room to make us look famous,” says guitarist Kris Towne. “That was the coolest show we’ve played as far as audience reaction. Here, it’s a pat on the back. There, people wanted pictures and autographs. It was a wild experience in that sense. People treating you like performers, not just buddies.”

“I lost my bag with my money, passport, everything,” says drummer Mike Hams. “We had a lot of whiskey and I left it at the venue. I spent the whole last day in Mexico at the embassy.”

“I almost got crushed by stage lights that night,” says Roquero. “I went to get a torta and when I came back the lighting rig had fallen right where I was and knocked the bass amp over.”

“Sour Soul has a house kind of similar to the Control Center [Scribe’s Linda Vista home studio] in Mexico City where they have small shows, host bands from out of town, things like that, and they have this huge mural that became the cover for the album,” says Towne. “It used to be the meeting place for an old underground communist group.”

“Someone had been killed there in a raid or something,” says Roquero, “and one night we heard his voice muttering ghostly things in Spanish.”

“These guys, we called them glass jumpers, would unroll a t-shirt full of glass and do a flip onto it on the train,” says Towne.

“They roll with a big guy,” says Roquero, “and once they’re all bloody they’ll go around and say, ‘We’ll take your wallet and everything, but if you give us your change we’ll leave you alone.’”

Montage around Mexico City with Scribe in their "Washingtonian" music video:

A SCRIBE AMIDST THE LIONS - WASHINGTONIAN (OFFICIAL VIDEO)

The first single from the new split, "Fever Rose," is now available for free streaming and a video is under production by Brilliant Something aka beat producer Room E (Dan Harumi).

“The song explores themes of over-expansion... progress vs. excess,” Towne says. “The future and past of our society is a twisted tale of growth and preservation. Musically the song uses a strong melodic direction and an upbeat feel - a change of pace for people who might only think of Scribe as a dark, brooding, prog-rock band.”

“I met Sour Soul doing sound at the Ruby Room and they just blew my mind,” Towne continues. “I felt like with Sour Soul, we could just gel and get people out and in tune with them. Like any band, they’re changing as they continue to play and write and I feel like we possibly influenced them on this split. But because the timeline was so short, we never got a chance to hear their music before the split, and they never got to hear ours. So when we heard the final version we were surprised. Scribe went more psychedelic pop and their song for the split turned out the be a six minute, epic, dark, kind of Muse-esque song, so it was kind of funny. We were both trying to gel with each other and it turned out great.”

“Up until now, La Escalera Records has been doing punk rock,” says Towne of the label run by Ezequiel ‘Ziggy’ Pelayo of Moosejaw. “So they’ve been expanding as well, it’s not just punk rock and also they’re going international.”

Catch members of A Scribe Amidst the Lions tonight as V Drago at Tin Can Ale House, where they’ll be bringing in the new year with alt-country outfits The Western Set and River City.

The split album is already available digitally, but the official US vinyl release show is set for Saturday January 7 at the Casbah with Children of Nova, Black Hondo, and the Flowerthief.

Sour Soul is scheduled to come back to San Diego on March 24 at an as of yet unsolidified venue.