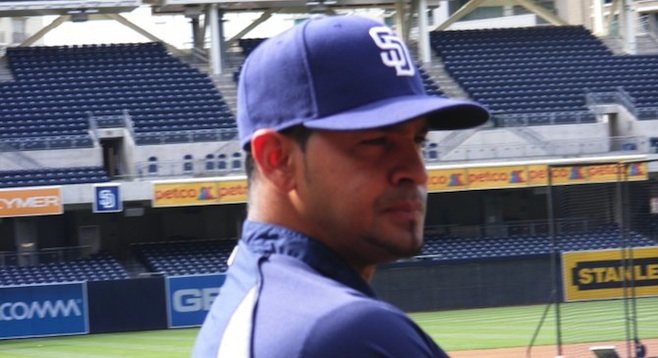 For the second night, the Padres bull pen fails to hold a lead and the Giants prevail

Padres starter Eric Stults certainly pitched well enough to win, but the bull pen failed his outstanding effort, something that has been happening far too often this season. Wednesday, the Giants came back to win 4-2, and take the rubber game in the series.

It was another close game between the two clubs, but there were some twists along the way. Scoreless in the top of the second inning, Giants starter Madison Bumgarner threw a pitch behind Jesus Guzman in obvious retaliation for Guzman’s emotional display after hitting a home run the night before.

Benches cleared after Guzman immediately reacted to the pitch, which somehow missed him. Cooler heads prevailed as they usually do, and with both benches warned that further retaliation would see ejections, play resumed.

The Padres got on the board first when Will Venable went deep for his team-leading 10th home run of the season, with no one on in the top of the third inning. The Giants got the run back in the bottom of the fourth inning when Stults gave up three consecutive singles.

The pitcher’s duel continued and the score remained tied 1-1 until the top of the seventh inning. That’s when Jesus Guzman exacted revenge on Madison Bumgarner for the second-inning beaning attempt by smacking a home run over the left field wall.

The lead, however, was short-lived. With one out in the bottom of the frame, Stults was lifted after giving up a single and Luke Gregerson came on in relief. Gregerson proceeded to give up three runs (one was charged to Stults) on four consecutive hits and failed to record an out before Tyson Ross came in and stopped the bleeding.

The damage was done by that point, and the Padres could offer no retaliation against the Giants bull pen. In a stunning reversal to what last season’s Padres pitching staff was, this season the bull pen is failing at a much higher rate.

While many fans, sports writers and people in sports media, and baseball analysts in general are keen on offering that the Padres are in need of a starting pitcher or two in order to compete, perhaps they should look toward the Padres bull pen instead. As did starter Andrew Cashner on Tuesday, starter Eric Stults on Wendesday pitched a fine game, but the relief corps couldn’t match their pace.

Still no word on Carlos Quentin, but sources indicate he still can’t swing a bat. He is seen in the club house with an ice pack on his shoulder and is receiving therapy. If he was to go on the disabled list, then that would likely happen either Thursday or Friday when the Padres are back in San Diego.

The Padres return to Petco Park on Thursday to face the Los Angeles Dodgers. The Padres will march out Jason Marquis (9-2, 3.63) to face Stephen Fife (1-2, 3.74) of the Dodgers. Game time is 7:10 PM PDST on radio 1090 AM and on Fox Sports San Diego. If you haven’t purchased tickets but are planning to attend any of the four games in this series, do so promptly because the folks in Los Angeles tend to fill Petco quickly.