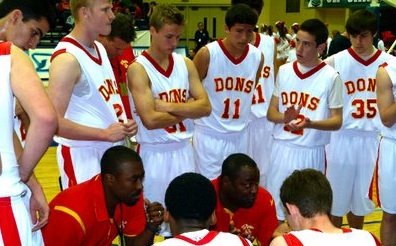 CARMEL VALLEY – No team in San Diego has been a bigger revelation this season than Cathedral Catholic. After winning the Division III section title the Dons have continued their success with a pair of dramatic wins in the state playoffs.

“It’s just been really exciting. No one thought we were going to go this far in the beginning, and we’ve been playing hard the whole season,” said Dons junior forward Xavier Williams. “We just want to see how long we can ride this.”

After a late comeback to beat Mission Bay by one in the section finals, Cathedral Catholic (30-3) has continued its pattern of late-game heroics on the state stage. In wins over Palm Desert and Oak Park, the Dons trailed at the start of the fourth quarter before eventually prevailing.

“We just try to keep poised. We’ve had close games that we’ve been able to pull out – somebody has been able to make a play,” said Dons head coach Will Cunningham. “The biggest thing is that they keep their composure and that they’re a very competitive group.”

Cathedral Catholic’s third-year head coach keeps his cool on the sidelines in pressure situations, and the Dons have followed suit. Williams said maintaining poise has been the key to the come-from-behind state triumphs.

“When it gets tough, we don’t panic,” Williams said. “Coach Cunningham tells us all the time that if we panic, stuff is going to be worse and when we’re down just push through and we’re going to be able to come back and win.”

Against 13th-seeded Palm Desert in the first round, Cathedral Catholic trailed by one entering the fourth quarter before closing out the Aztecs for a 65-57 win. In the second round versus fourth-seeded Oak Park, the Dons started the fourth quarter on a 14-2 run to erase a four-point deficit and set the stage for a thrilling 89-79 double overtime victory.

“It was really tiring and exciting,” Williams said. “It just made getting that win all the more better.”

Against Oak Park, Cathedral Catholic survived a furious finish that included a 35-foot buzzer-beater by Eagles guard Ron Lee to force the second overtime. In double overtime, the Dons pulled away to advance to the Southern California regional semifinals.

“For a split second we were deflated – we thought we had the game and were ready to go home and then he hit that shot,” Williams said. “Our coach snapped us back into reality and said we had to finish it up, and we had to do what we had to do.”

Though Williams has led Cathedral Catholic in scoring in each of its two state wins, the Dons’ balance between its unselfish core of juniors is what makes them a tough matchup for any opponent. Guards Brandon Michel, Nick Prunty and Niksha Federico are capable of taking over any game, and any player in the Dons’ seven-player rotation is capable of taking the big shot.

“It definitely makes us hard to prepare for. It’s not like you can just key on one guy,” Cunningham said. “They play well together – that’s probably the biggest thing. There’s no personality conflicts and they’re all happy for each other.”

Cathedral Catholic travels to face top-seeded Mission Hills Alemany (30-4) tonight with a spot in the regional finals on the line. The Southern Section Division 3A champion Warriors own a pair of double-digit victories over Oak Park and are currently ranked seventh in the state by Cal-Hi Sports.

“We can’t wait to get on the bus and play that top-ranked team at their place,” Williams said. “It’s going to be packed, it’s going to be intense and we’re all just really excited.”

In its biggest game of the season, Cathedral Catholic will stick with its pregame routine to stay loose. That includes chanting ‘Dons’ in a circle and concluding by taking a group knee in the fashion of NFL quarterback Tim Tebow before tipoff along with a creative writing activity in the locker room.

“Before every game, if there is a whiteboard or chalkboard, we’ll do something called ‘Question of the Day’ – a little team activity where Brandon Michel comes up with a funny question and everybody writes funny answers,” Williams said. “It’s nothing really serious, but it just gets some smiles before the game.”

There have been lots of smiles for Dons during the 2011-12 season, the best since the school moved north and changed its name seven years ago. Cathedral Catholic has added to the hardwood success built at University of San Diego High – including a state title in 1998 – while creating its own identity.

“Hopefully after this season and next season, Cathedral can be known as a basketball school. We’ve been good at every other sport but we’ve just been decent at basketball – and we’re trying to change that,” Williams said. “All the support that we’ve been building up this whole time is just making this all that more special.” Pictured: Cathedral Catholic huddles up around head coach Will Cunningham during the Division III section finals