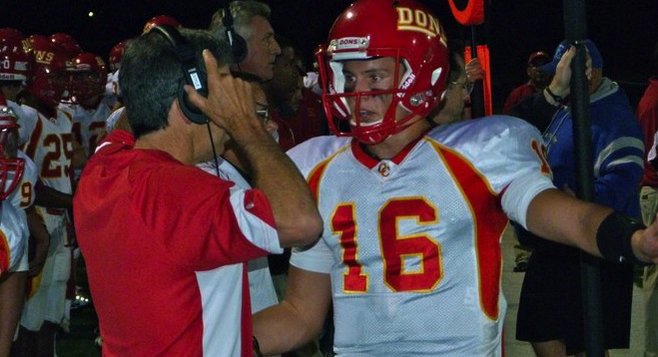 “We have a lot riding on our shoulders right now to go for the six-peat, but it’s like every other year,” said senior linebacker Toshaun Poumele. “We’re preparing like we always do and we just have to hope that we can get it done this year.”

Last season, Cathedral Catholic extended its section crown streak with a decisive 41-0 win over Olympian in the finals. For the Dons, winning championships has turned into a distinct possibility every year.

“It starts becoming an expectation – there’s a level of expectation and these guys don’t want to be the team that doesn’t win,” said Dons head coach Sean Doyle. “So they work their tail off in the offseason, and then it’s the belief that they have the ability to do it.”

The Dons have the talent and experience at key positions this season to allow for another section championship run. On offense, senior quarterback and three-year varsity starter Garrett Bogart leads a unit that will have a diverse attack.

“Last year he had a very good season, and with the way he threw in the summer and his confidence and leadership,” Doyle said, “I think he’s really going to be a tough quarterback to stop.”

A pair of returning running backs – senior Tony Johnson and junior Chris Moliga – will pace cathedral Catholic’s running game. In the air the Dons will look to senior Xavier Williams, a 6-foot-3 inch receiver known more around the section for his exploits as an All-CIF small forward on the hardwood.

“I think he’s going to be one heck of a football player – I just don’t know many guys that are going to be able to shut him down, and that’s going to open up a lot of things for us,” Doyle said about Williams, who is playing football for the first time since his freshman year.

Cathedral Catholic’s defense has a difficult challenge to match the spectacular play of the 2011 edition, which allowed 22 points in the final 10 games and didn’t surrender any points in three postseason games. Poumele played a key role in that defense, and the 6-foot linebacker is the leader of the Dons’ defense headed into this season.

“We just want to do the same thing we did last year,” Poumele said. “We know we aren’t going to be as big as we were last year, so we worked harder in the offseason. Coach [John] Montali and the whole defensive staff have done a great job coaching us and pointing us in the right direction.”

Though replacing a host of defensive talent from last season, Cathedral Catholic also has a number of returning players ready to step back onto the field. Junior defensive linemen Kyle Davis, junior linebacker Xavier Ulutu and senior cornerbacks Parker Price and Brandon Michel provide stability in a group counting on new players.

“We’re just going to try and emulate some of the schemes and techniques from last year and then try to improve upon them,” Michel said. “We want to try and do as much of what we did last year this year.”

Cathedral Catholic opens the season at Steele Canyon Aug. 31, and the Dons’ nonleague schedule includes a back-to-back stretch against Helix and Vista Murrieta in the third and fourth weeks of the season. The defending Division II state champion Highlanders were the only team to beat the Dons last season, and the Broncos come into the season ranked third in the state by Cal-Hi Sports.

“If we’re going to say we want to be one of the best teams in San Diego County, we can’t say that without playing the upper echelon teams as much as we can. The worse thing we could do is lose, and we’ve never been concerned about losing,” Doyle said. “It’s a great challenge for our players and our program.”

Cathedral Catholic enters the 2012 season focused on keeping its championship streak intact. They need only look to past Dons teams to find the blueprint for success.

“Another CIF title is definitely in our hopes, but we’re going to try and focus on each opponent and achieve our ultimate goal — a CIF title and a chance to play in the state championship,” Michel said.