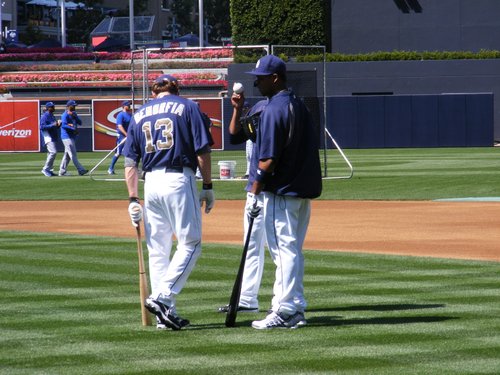 Chris Denorfia and Will Venable chat before batting practice.

Padres manager Bud Black is always talking about getting the big hit, that it's necessary in order to win games. Wednesday afternoon, the Padres got that big hit. Chris Denorfia hit a two-run shot to lift the Padres to a 2-1 win over the Arizona Diamondbacks. The three game series is now tied at one game apiece.

The game started dubiously again for the Padres. Willie Bloomquist opened the top of the first inning with a walk by Padres starting pitcher Cory Luebke, and then stole second and took third on catcher Nick Hundley's throwing error. After Aaron Hill grounded out, Luebke walked Justin Upton. Miguel Montero struck out, and then Luebke walked Chris Young to load the bases.

Luebke then walked Jason Kubel to force in a run, and the Diamondbacks led 1-0. Then Luebke struck out Paul Goldschidt to end the inning. Luebke burned over 40 pitches in the inning. After that Luebke settled in and was effective through 5 1/3 innings, not giving up another walk while scattering four hits and striking out 5 Diamondbacks.

In the bottom of the eighth inning, after Will Venable popped out, Cameron Maybin drew a walk and Chris Denorfia belted a home run to center field, where Diamondbacks center fielder Chris Young actually lost his glove trying to make the catch and the ball hit the glove on the way over the fence. That put the Padres up 2-1, and Huston Street got his first save in a Padres uniform setting the Diamondbacks down in order.

After the game, Black talked about Denorfia's home run. "Cool day and the ball didn’t seem to be carrying. That part of the park in straightaway center, there’s a home run there."

Cory Luebke struggled with his pitch count early, but brought the count more in line after that, throwing a total of 104 pitches with 65 for strikes. Buddy talked about Luebke's performance. "The biggest out of the game was Goldsmith in the first inning. He backed himself into a corner and he had to get out of it and he did. And then he got into the sixth inning, so I’m proud of him."

With Huston Street's first save opportunity of the year, his walk-out song was finally revealed to be "Stranglehold" by Ted Nugent. This was a bit of a surprise, since the first track from the first album by the Motor City Madman was released in 1976, a full seven years before Street was born. But you don't mess with success, that walk-out song will be Street's until it doesn't work for him anymore. No word on what Nugent thinks about it.

Wednesday's changed line-up included Andy Parrino in for Jason Barlett at shortstop and Kyle Blanks getting the start at first base over Yonder Alonso. No word from Black as to whether the lineup will be more dynamic in the future. Both Blanks and Parrino played solid defense at their positions.

Mark Kotsay is close to rehabbing his right calf sprain in minor league games. Buddy Black indicated that Kotsay would soon go up to A-plus Lake Elsinore and play some games with the Storm in order to get ready.

Thursday will be the rubber game in the series, with the Padres long-reliever Anthony Bass getting the start due to both Tim Stauffer and Dustin Moseley on the disabled list. The Diamond backs will go with Ian Kennedy. Both are right-handed pitchers. First pitch is at 7:05 PM, and can be watched on television broadcast by Fox Sports San Diego and carried on Cox Cable and DirecTV. Radio is heard on XX 1090 AM.