Translated by Fulano from an article in El Mexicano

MEXICALI.- In front of the apathetic view of thousands of people and forgotten by the authorities, laying on the sidewalk, an individual waits for death just one block from the Government Center and a few yards from one of the busiest intersections in Mexicali, at Calafia and Independencia.

Without the energy to get up, the man shakes and babbles. Rescuers from the Red Cross arrived at the location with gloves and masks, but they limited themselves to looking at him and left him there.

Isidro Olvero, from the town of Tecolotes in the Mexicali Valley, is one of the many homeless who swarm in the Civic Center. He would be between 40 and 45 years old.

There are thousands of people who see him laying next to an OXXO from their urban buses and automobiles; the pedestrians go around him.

Guadalupe Jáuregui Sandova, an OXXO employee, told El Mexicano that the man has been laying on the sidewalk about one week. She bathed him yesterday when she left work. "He is not an animal, he is a human being, it is unjust that he lays here in this condition," she said. 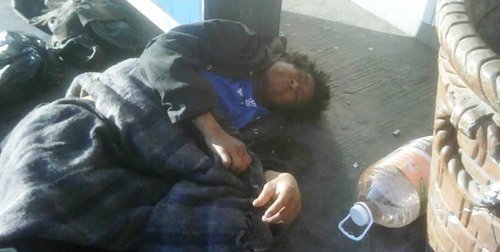