Gourmet On 5th: Not French enough?

Ed wants accordions and romance. Is he asking too much?

Standing at Fifth and Laurel. The choice: Cucina Urbana, Hexagone, Pizzicato Pizza, or the kind of anonymous-looking Gourmet on 5th. So okay, costwise, the choice is just between the last two. The others would wreck the en-tire week's budget.

I end up heading into the mysterious little Gourmet. Mainly because I hear that French singer Charles Aznavour crooning like a French Sinatra. Not that I love Sinatra, but, well it's complicated. Something about the smokiness of the song draws me in. You get to thinking Humphrey Bogart, Lauren Bacall, Turner Classic Movies. 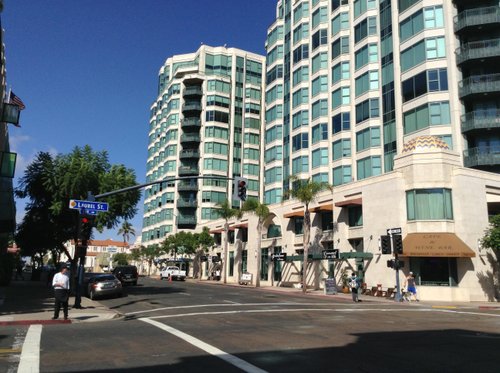 Inside's not that romantic, but when you think about it, it feels like some Parisian bar where guys come in and say "Gimme a Rouge and a Crôque," chug, chomp, burp, leave.

Actually I see they do have a Crôque Monsieur for eight buckeroos. And most of the food is eight to ten dollars (though I see they've got a Caesar salad for $5.50). And they have dinner specials, two-course for $14, 3-course for $16 (not bad when it includes, say, potato basil soup, chicken Marsala and lemon meringue tarte).

I end up getting a Niçoise salad from this Parisian dude Lucien... 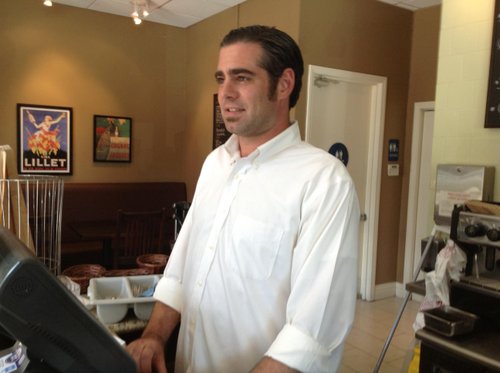 ...mainly because it has anchovies. It costs $8.95 but it's big. Tons of greenery, plus those anchovies, a chunk of tuna salad, another blob of potato salad, generous pile of black olives, a quartered boiled egg, not quite enough vinaigrette, bread, and, when I ask for it, butter. If I wasn't so danged hungry and greedy, I'd say it was too much. 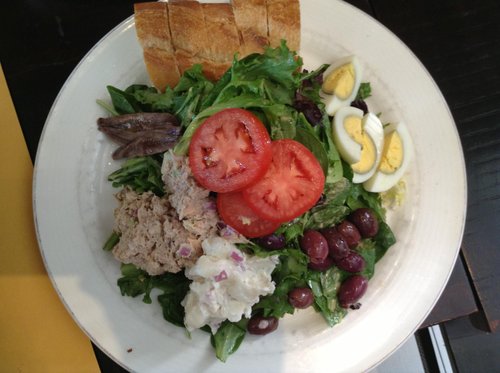 Gal opposite happens to be eating a spinach salad (with mushrooms, feta cheese, turkey, apple, cranberries, $7.75). 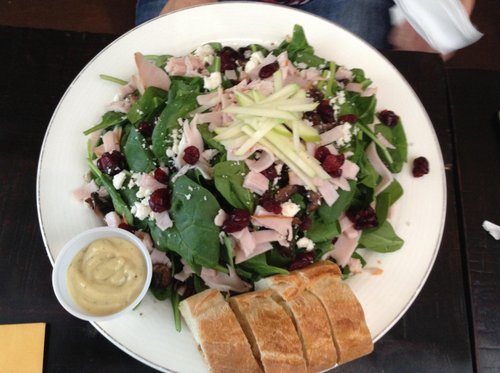 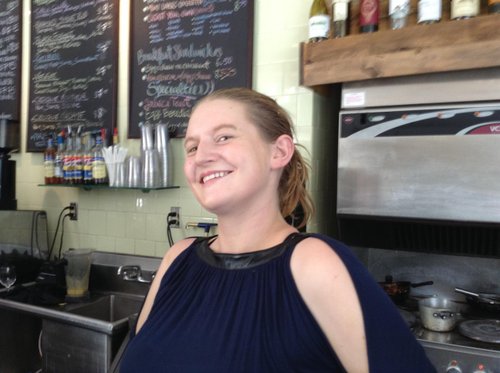 ...says a lot of people go for the Cali Club sandwich ($7.95, with chicken bacon, avo). "Or in the mornings, the ham, bacon, egg, cheese breakfast sandwich," she says. It's $8.50. Turns out they open seven sharp every morning.

Whatever, the salad's good. Would love to have put out $5 for a glass of wine, but it's a working afternoon coming up.

You leave feeling this is nice, pretty good value, and yes, they had the anchovies. Only thing is you want the feel of the place to have more flair, more Frenchness about it. More umbrellas and tables and life outside on this fabuloso corner they've got. Same goes for Hexagone (same people, it turns out) kitty-corner across Fifth. Same goes for Cucina Urbana, across Laurel. They're all huddled inside, geared to be ex-clusive, hidden away like they're only for Better People, not using the see-and-be-seen opportunities the location offers them.

Even Starbucks, a couple of doors down from Hexagone, does better on that score. 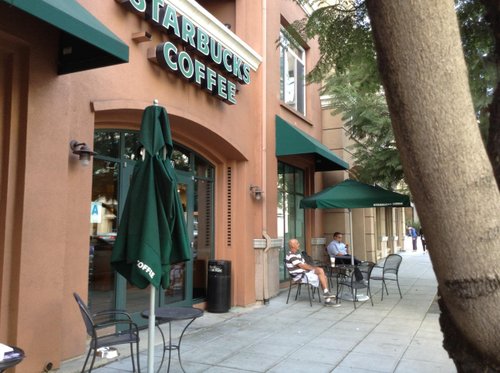 Okay, not that much better. But hey, Gourmet was good. I actually liked it. Maybe I'd bitch less if I'd had that glass of wine.