Huevos de toro at Café Europa downtown: Thanks for the tip!

Guy’s playing it just inside the door of the Gran Tapa. This time I don’t just hang around listening. I go in. 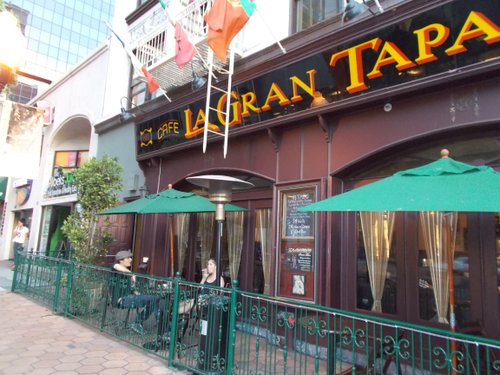 Two things I remember about last time I was here, six months ago: the live guitarista and the tortilla Española, $4 in HH. This is more like a quiche, basically a thick omelet of eggs and spuds cooked in olive oil. Known as the poor man’s belly-filler.

Trouble is, today, as I sit up to the bar (only place HH happens), after I get a glass of Chianti (for $4!), the little menu mentions “huevos de toro.” Also four bucks. Basically meat balls. Who can resist? Comes with a giant chunk of sawn-up French bread and four, five golfball-size meatballs in a nice thick tomatoey, garlicky lake. Great for slopping your bread in.

I swear, this place is one of the best for a HH around. Why? It’s not the swankiest. Not in this part of town. And some people get bummed because they include the tip in your bill (I like it. Takes a load off your mind, and they have a good complaint policy if the service sucks). But one, it’s cheap, and yet feels a little bit exotic, like you’re in a tapa joint in downtown Madrid.

And these huevos are big and filling. Man, I’d love to stay and chat, ’cause chatting’s easy here, with the shape of the bar and the atmos the bartenders set up. But this little meal makes it easy to chomp and run. I spend 20 minutes, pay my bill ($10.15, including tax and tip) then blast back out through the doors as the guitarist picks away at Malagueñas. Beautiful. Dramatic.

Now I’m sitting on the trolley humming the danged thing. I know it’s gonna stay with me for hours. And hey, those meatballs will keep me going all night long.