Brews Up and Ogawashi team up for Japanese craft beer tasting

Thanks to the prevalence of craft beer in San Diego, our citizens are becoming very familiar with brews from the world’s most suds savvy regions—Belgium, England, Germany, the United States. Even the burgeoning beer scene in Mexico is finally leaking across the border. Yet, there are plenty of countries whose ales and lagers have yet to enjoy a presence, much less a following, even here at craft beer central. Count Japan among them.

When people think of Japanese beers, several familiar brands spring to mind—Asahi, Sapporo, Kirin. It's quite similar to how when citizens of most other countries think of American beer, their minds pull up images of a handful of U.S. macrobreweries with the money and power to get their beers to market across borders and overseas. Much as it would be a shame for our country’s brilliant craft brewing industry to be represented by the likes of Anheuser-Busch InBev, it’s a crime that Americans have little or no idea that Japan is experiencing its own craft beer revolution.

A few weeks ago, I had the chance to enjoy first-time tastes of a number of Japanese craft beers at a tasting put on by local company Brews Up at new metro sushi spot, Ogawashi (1100 Fifth Avenue, Downtown). The event took place in Ogawashi’s second-story dining space, which Brews Up made great use of, projecting graphics displaying each individual beer and everything one could want to know about it (origins, brewing company, alcohol-by-volume, ingredients, anecdotes, and more) on the walls. At tastings like this, emcees usually rattle off more facts than one can remember (or quickly jot down in the case of writers or beer nerds) and that’s that. It was extremely beneficial to have the data on-hand over the course of each course. 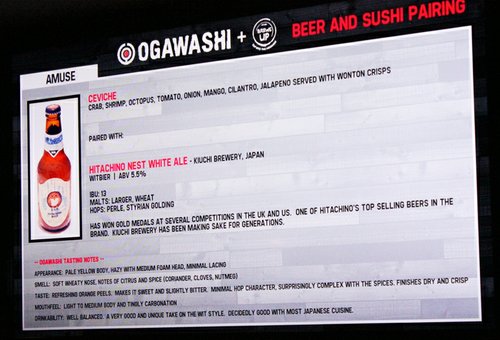 The first beer was Hitachino Nest White Ale. While I was disappointed to have such a readily available beer that I’ve drunk many times, I had to commend organizers for selecting the perfect gateway beer to draw in people either not into craft beer or unfamiliar with Japan’s craft offerings. Hitachino’s Belgian-style witbier is one of the world’s best interpretations of this style, refreshing and packed with just the right levels of orange and coriander. It was actually the high quality of this wheat beer that made the one that followed, Echigo Koshihikari, seem so lackluster. A lager made with pilsner and wheat malt and the variety of Japanese table rice it’s named for, the beer was smooth, easy drinking and slightly floral, but fairly unremarkable save for a note I took about sensing tinny canned corn nuances in its finish. 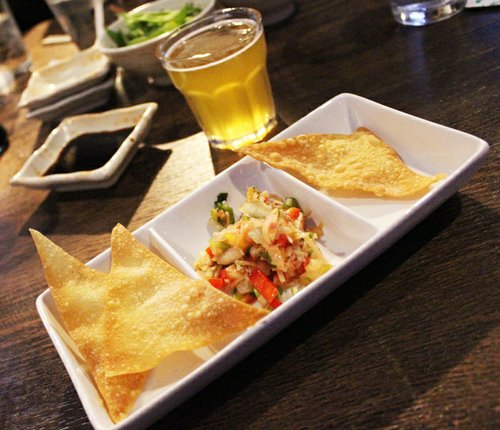 The third beer, Coedo Beniaka—a nutty, caramely, crimson red brew made with Kintoki sweet potatoes from Kawago, Japan—provided the best example of a Japanese brewery utilizing an indigenous ingredient to make something special. It reinvigorated my palate and my interest, putting me in the right anticipatory frame of mind for the next brew, the stellar Aooni IPA from Nagano’s Yo-Ho Brewing Company. It was sharp and potent enough in its hop presence to be mistaken for a West Coast IPA, so I wasn’t surprised to learn that it was the product of Toshi Ishii, a brewer who honed his craft at Escondido’s Stone Brewing Co. before moving back to Japan to take his current post. 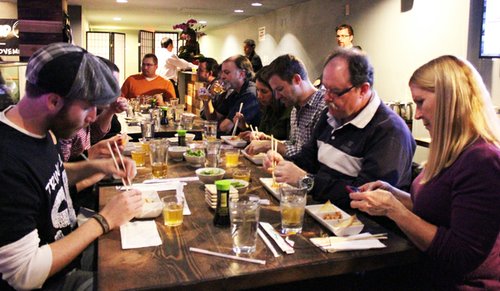 But the beer was only half the tasting. Each brew was paired with Ogawashi’s sushi and other edible offerings. For me, the only pairing that married perfectly with its assigned beer was a mango-sweetened ceviche of crab and octopus presented with the Hitachino White. The cilantro in the dish created a flavor bridge with the coriander in the beer. Other than that, everything was good, but not necessarily connected. On the food front, I was particularly impressed with escolar, one of my all-time favorite fish, served nigiri-style—simple, clean and delicious. A spicy lobster roll lacked enough heat to stand up to its avocado innards, but was tasty all the same thanks to a sweet accompanying eel sauce. Had it been more fiery, the IPA would have been a perfect counterpart, but since it wasn’t, the hops held court. 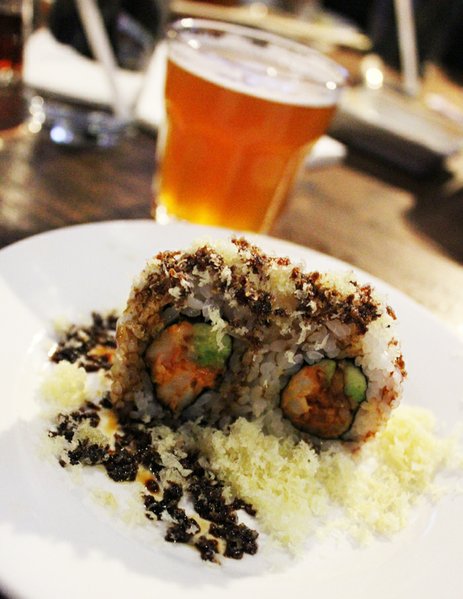 Overall, it was a well organized event where the venue and the organizers worked very nicely together. It was obvious a great deal of thought was put into the evening. That made it both informative, fun and, best of all, kept things on schedule. The courses came out at a consistent rhythm and despite it being a sell-out, the servers kept their cool throughout and were attentive without being overbearing. Brews Up holds events like this regularly. Future beer-inspired gatherings can be viewed on their website.

Next stop on the tour of underrepresented yet thriving craft beer countries: Italy!