Stick with the silly drinks and you'll be OK.

Martini’s Above Fourth (3940 Fourth Avenue) and I disagree on what, exactly, constitutes a “Martini.” I’ll argue in favor of gin, a splash of vermouth, and an olive or two. They seem to think that anything served up in a cocktail glass warrants the name. I had to put aside one of the most divisive issues in drinking just to order a cocktail there!

It turns out there’s cake-flavored vodka out in the world now. Cake. I mean, I knew they had bacon, coconut, vanilla, and pineapple, but “cake” was a new one on me. And the bar at Martini’s mixed that nonsense up with strawberry puree and dropped a dollop of whipped cream on top. It actually did taste like strawberry shortcakes.

I stand, if not corrected, at least amused.

And then there was the “Snickers bar” cocktail, or the “butter pecan,” or any of the other forty-odd half-crazy, half-inspired concoctions. I concede a small victory to the pink, fizzy, frilly drinks of the world. I’ll have one every now and again. Old Fashioneds can wait.

Martinis’ food lacked something in charm. Macaroni and cheese hardly justified a ten dollar price tag by being unexceptional. Similarly, an “herb encrusted” sea bass special wasn’t worth $25. The portion was generous, but the bready fish lacked any distinguishing qualities. The cous-cous and carrots that accompanied the fish, while not terrible by any means, were likewise unimpressive at that price. It’s hard to say much about the food because there was very little happening on the plate. 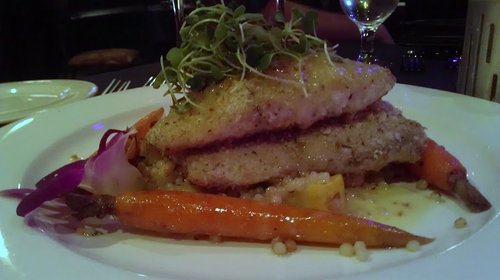 Sea bass looks nice, but doesn't have much going on beneath the surface.

Perhaps the best looking things to come out of the kitchen were the burgers I saw delivered to other tables. Bearing a more reasonable price ($15), they are a safer bet than the main dishes on the menu, which edge up towards $30 but don’t really deserve such premium pricing.

On any given day, I’d be more likely to just order another hilarious cocktail. 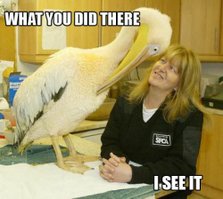 I think "why it's not called Eats Above Fourth" (or some variation thereof) would have been the best header ever. Thanks!

I still have never been up there. Now I must try it.

Have a few "martinis" upstairs and then just head down and eat at KousKous.