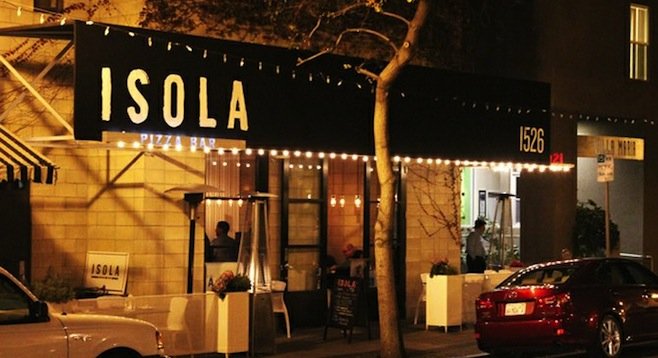 Isola serves lovin' from the oven

Pizza’s the focus, but its upstaged by unexpected stars

Italian in Little Italy—what a novel idea. Nowadays, with trendy ramen joints, second-story comfort food perches, and burger joints popping up and fitting in just fine along India Street, the arrival of traditional Italian is a bit less expected. At face value, there’s little need beyond cultural tradition for more Italiano, but Isola Pizza Bar (1526 India Street, Little Italy) brings plenty of originality and some good eats to the area despite dealing in the local bread-and-olio.

As the name implies, pizza or, more appropriately the apparatus that cooks it at a temperature of 900 degrees Fahrenheit, is the focus here. That high-temp fixture is used to cook a great many dishes and the results, by and large, are magnificent. My favorite was something you might not expect from a ‘za bar—a dish of charred octopus tentacles, Kalamata olives, and fingerling potatoes dressed in a salsa verde. 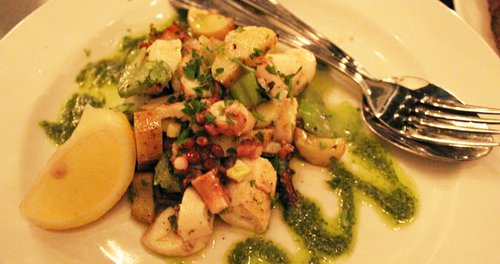 The octopus, perhaps the best I've had, is so wonderfully tender that if one was blind-folded, they might be stumped trying to identify the protein. Overall, the dish is a lovely coming together of smart, simple ingredients. When people go on and on about how the beauty of Italian cuisine is its brilliant simplicity, plates like this are exactly what they’re referring to. Celery adds some nice crunch while a squeeze of lemon simultaneously cools down and brightens up the warm savory dish. 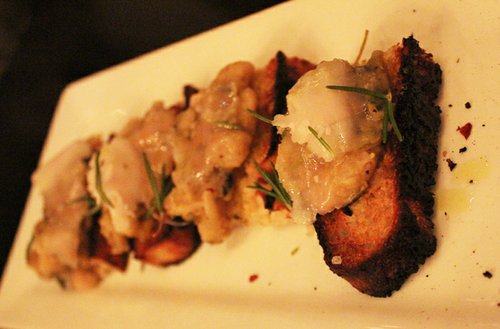 Bruschetta is a bit of a throwaway dish for me. Typically, it’s simple to the point of boring and I see little reason to pay for a dish I could make at home...with one hand tied behind my back…in my sleep. One version I enjoy preparing for parties is a simple white bean variety. When I saw that they not only offer a variety made with cannellini beans, but top it with lardo, it was enough to break me of my no bruschetta tendency. The beans, mostly pureed but with plenty of whole beans to keep things interesting, were perfectly salted and protected the bread underneath from the blackening power of the oven, keeping it tender in the center. It was both hearty and tasty. The only knock—you’ll want to remove the rosemary as it brings on an unpalatable bitterness.

With appetizers happily downed, it was time for the star of the show—their All Amatriciana pizza. A simple pie of mozzarella, and cherry tomatoes topped with guanciale (cured pork jowel), Parmigiano-Reggiano and black pepper, I expected a lot. Especially from a pizza bar sporting an oven that had turned out some splendid starters. But it was the only underachiever of the evening. 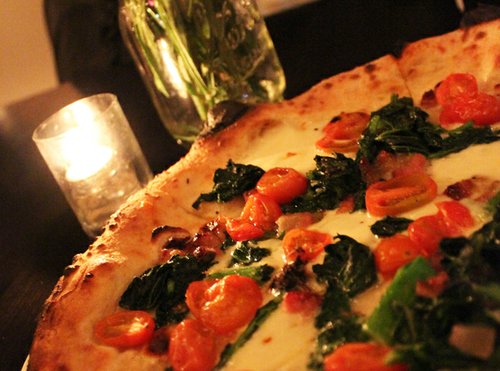 While the crust was divine on the outer edge, cooked to perfection and extraordinarily tasty, the center was soggy and too thin to support the toppings, which also fell flat. The guanciale was chewy and diced too small to get much flavor out of it, and the tomatoes were compact little acid bombs that eclipsed all other flavors. It was a bit strange, like having a salad on top of a round of dough. Fortunately, the best part of the dough, the naked outsides, can be experienced for free because Isola may have the best complimentary bread in the city, strips of baked dough salted and drizzled with good olive oil.

As a venue, Isola is pleasantly contemporary. Chianti bottle candle holders and checkered tablecloths would clash with the neutral palette sleekness of this Edison bulb-adorned social hub. While confused at times, the staff is pleasant and courteous, and though the food comes quickly, the clientele is left to enjoy at their own pace and even linger if demand allows. Though the pizza was less exciting than expected, this place rolls out plenty of oven-borne deliciousness and makes for a nice addition to the neighborhood.