Last year, farmers market maven Catt White and business partner Dale Steele went the Kickstarter route in search of funds to bring a central, grand scale public market to San Diego. The campaign was successful, raising more than $146,000 in just over two weeks. 1,379 individuals contributed funds to get the market up-and-running at its 92,000 square foot site. Ultimately, the San Diego Public Market will feature full-time shops and restaurants built for and around local farmers, ranchers, fishermen, and various other artisanal food and beverage producers on a twice-a-week basis.

But there is a way to go before that happens (later this year by White and Steele’s projections). Just as San Diego foodies showed their support with faith and funds, San Diego’ farm-to-table chefs are contributing their talents and energies in putting on a fundraiser this Sunday, February 10 from 4 to 6:30 p.m. at the market (1735 National Avenue, Barrio Logan). Called A Taste of the Market, it will offer just that, a sampling of what can be expected when the space is filled with individual food vendors. To create that atmosphere, the participating chefs—most of which are a part of local chef consortium Cooks Confab—will be setting up one-day-only restaurant concepts and serving up dishes made using ingredients from local purveyors. 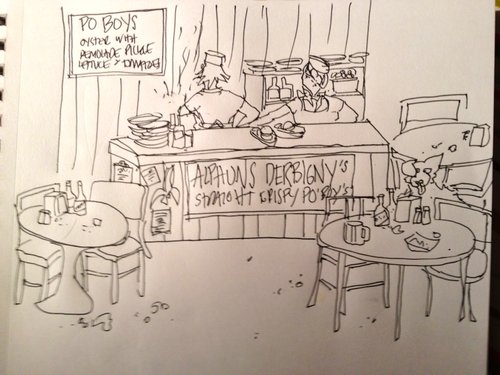 The rough sketch for chef Andrew Spurgin's po' boy restaurant, which will be set up for A Taste of the Market this Sunday in Barrio Logan

Chef and event chairperson Andrew Spurgin is setting up a Louisiana-style po’ boy restaurant with mismatched chairs with torn upholstery, dented up used napkin dispensers, and bottles of Pelican State condiment staple, Crystal Hot Sauce. Other concepts include a tortilleria, pig roastery, and a baked goods outlet. There will also be a chicken coop photo both. Further adding to the variety and festive nature of the event will be Snake Oil Cocktail Co., who are putting together a bar. No word on whether there’ll be adult beverage options when the San Diego Public Market opens, but for one special afternoon, that enhancer will be present. Tickets are available online, and the full slate of chefs and their dishes is as follows: