New cocktail and spirits bar downtown looks like a silent movie villain, but puts some very cool ideas onto the drink menu.

Frauds and Swindlers (820 Fifth Avenue, 619-814-5700) soft-opened over the weekend, but a grand opening date is set for August 24th and the staff swears, “it’s going to be a wild party.” That remains to be seen, but one thing is for certain, Frauds and Swindlers shows there are still some fresh ideas coming up in the still-burgeoning cocktail scene. Things have not yet devolved to cookie-cutter cocktail bars rehashing and watering down each other’s ideas to a comfortable mediocrity...here’s looking at you, farm-to-table dining!

The new bar, which is owned by a group of LA entrepreneurs, embraces a weird kind of Snidely Whiplash aesthetic. It’s akin to the brand-new-old-timey feel of Polite Provisions or Noble Experiment, but with more Gold Rush and less Jazz Age, if that makes any sense. 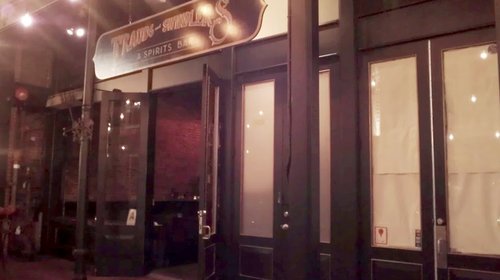 Not a very good picture of the front door. Lighting isn't a big priority at Frauds.

Overall, the drinks look like they’ll be sweeter and less aggressively bittered than other places going wild on the cocktail craze. They’re going to be easier to drink for the 24 Hour Party People crowd that will no doubt populate the barroom on any given night. But the aforementioned fresh ideas come out to play halfway through the menu. The masters of the bar had the great idea to install a juicer back there, so that fresh juices appear, with or without booze! We’re not talking lemon and lime juice here. They’re juicing kale, apples, spinach, carrots, and turmeric, and ginger! The plan is to serve the fresh juices up with a shot of liquor on the side, or just to serve the juices as a boozeless tipple for teetotalers. Smart, and, unless someone else is doing it already, a brand new idea for SD’s cocktail scene.

Right now, in the quiet lull of soft opening, Frauds and Swindlers has a cool vibe. Instead of the ubiquitous pop hits, the house soundtrack is all Beatles, Louis Armstrong, Black Keys (even some of the songs that don’t suck!), and Johnny Cash. The plan is to get country, bluegrass, and rockabilly bands on stage for live music nightly. If they actually follow through on that, Frauds and Swindlers will be rad. With about a million clubs where you can hear overloud remixes of “Call Me Maybe” (with which there is nothing inherently wrong), a place with a different soundtrack will be welcome. The question is, will Frauds and Swindlers keep that promise? Or will they cave to the demands of the popped collar crew and let the music and vibe become generic? Time will tell.