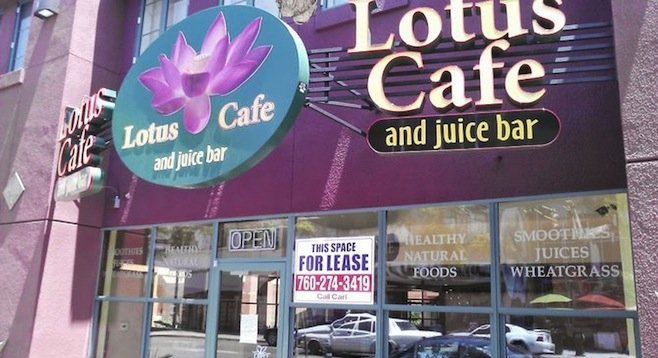 What's next for the perpetually troubled location adjacent to the Hillcrest 24Hr Fitness?

Lotus Cafe gave it a go, but the Hillcrest location is done. Stick a fork in it. The original location in Encinitas remains, hopefully unharmed by the failed venture in Hillcrest. “We will be waiting for you [at our Encinitas location] with smiles on our faces and our arms wide open,” says a handwritten note, attached to the door by the owners in a bid to steer customers thirty miles north. 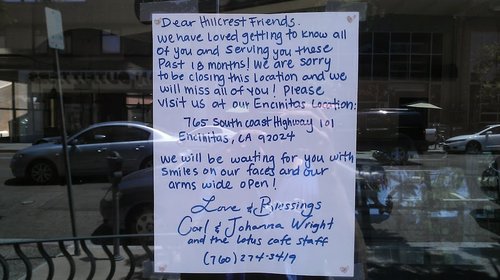 As restaurant spaces go, the sprawling venue at 3955 Fifth Avenue looks risky. Enormous restaurants are hard to operate. The risk of night after night of paying the bills on empty chairs is so great. Lotus Cafe moved into the spot unsuccessfully occupied by Pizza Nova, and it looks like they had the same problem. The place was all too often empty. Even acquiring a beer and wine license--usually a good way to increase revenue to operable levels--couldn’t get enough butts in chairs to keep the place open.

Lotus Cafe and Juice Bar follows Smashburger, Freebirds World Burrito, Banana Leaf, and Pizza Nova down the road to closure on this particular block of Hillcrest within the past few years. All three restaurants were proven concepts, successful in other locations. All would have had money and experience backing them. It’s only a matter of time before another enterprising restaurateur looks at the empty building and sees his dream restaurant, no doubt flourishing in his mind’s eye.

So, here’s some advice for that would be restaurateur: walk away.

This is just a bad spot for another restaurant. Too many places have shuttered there after failed bids to carve out a chunk of Fifth Avenue’s wildly oversaturated dining scene. Sure, there may be a lot of foot traffic and the area may be a proven nightlife hub, but there’s not enough cake for everybody to get his fair slice, so to speak.

The only concept that really works for 3955 Fifth Avenue is a 24-hour coffee house. Post-bar drunken revelers would have a spot to sober up. Hospital employees on the graveyard shift could get their coffee breaks. Maybe Lestat’s could make it work. Either that or the space needs a renovation and a new life as a different kind of business. There’s no need to doom another restaurant.

Maybe it should become a doctor's office/small clinic.

That would be a much better use of the space than yet another restau. I am sure the hospital has some need of clinic space.