A Tale from Inside Hotel Hell

Aside from admiring a chef with the chops and the gumption to make the rise he has, I just plain get a kick out of Gordon Ramsay. The scowl, the sarcasm, the expletives—he’s good TV. I regularly tune in to catch the latest edition of anger and come-uppance with Gordo, whether it be Hell’s Kitchen, The F-Word, Kitchen Nightmares, or even the relatively tame Master Chef where he’s a great deal more positive and even outwardly supportive with his cast of aspiring cooks.

Ramsay is good at telling it like it is; dishing out the hard truths that, in modern-day America, usually go unspoken. Even so, I had to wonder how well suited he’d be to take on the critic’s role for his new program, Hotel Hell. The premise of this show, which debuted in August and aired its finale last night, is much the same as Kitchen Nightmares. A failing lodging establishment reaches out for help from Ramsay and his wealthy backers at FOX. Ramsay visits and immediately rips the place to shreds in the most brashly confrontational manner possible. Ramsay gives his two cents on how to fix things, implements changes, and gives the hotel’s owners and staff a new lease on life before hitting the road, disappearing into the night with one last snarky comment. Fade to credits.

Despite the fact Ramsay is out of his element, the show works because, for the most part, he points out no-brainers that any layperson could offer about the hotel itself, then focuses heavily on the lodging’s restaurant component, which he is plenty qualified to beat down and build back up. This was how it went down on the episode of Hotel Hell that aired Monday, August 27 and focused on downtown San Diego’s The Keating Hotel.

As soon as I saw this installment teased at the end of the episode that preceded it, I was excited to see a local business go through the Ramsay rebuild machine. Mostly because it would mean I’d have a local resource to tap for information on the legitimacy of the show. This is television after all; a medium where everything is not always exactly as it seems. To see a show play out over and over again the exact same way—business owners cursing Ramsay’s name with bloodthirsty hatred only to later hug it out while proclaiming him a Godsend—well, it all seems a bit too dually extreme to be real. 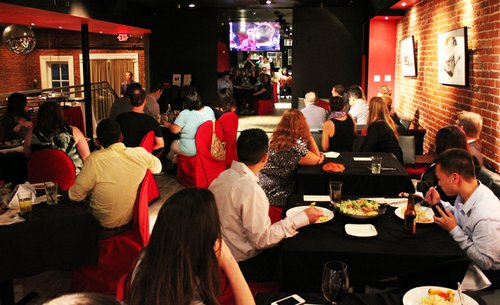 I actually ended up watching The Keating’s episode from the private dining loft on the second story of the hotel’s restaurant, The Merk Bistro. Friends of the business and a few members of the media were invited to view the show while tasting items from the new menu Ramsay developed, all while in the presence of the hotel’s owner, Eddie Kaen, and his staff, none of which had seen the full episode. Talk about a tense situation. Still, going in, I had to give them props for having the stones to allow themselves to be so exposed. Afterward, however, I wondered if that brevity had paid off. Ramsay really put them through the wringer!

It was one of the most hilarious episodes of the show yet. Ramsay fired off witty comments at a rapid and unrelenting pace. Everything from the linens and furniture (ridiculously expensive designer bathtub included) to chef Brian Rutherford and his menu items (chicken under a brick was said to look as though someone had shit a brick) to a dog sitting in the hotel’s entryway were criticized. Sadly, many of the critiques were justified even if they were issued with over-the-top sarcasm.

As is the case with almost every venue featured on Hotel Hell or Kitchen Nightmares, the staff didn’t hold back. To a person, they decreed over and over again that Kaen was the biggest problem. And, as with nearly every episode, the owner got severely pissed off and defensive. Yet, by show’s end, everybody—the owner, general manager, chef, front desk clerk, guy who delivers their morning papers, homeless guy who squats outside the hotel’s front door hoping for a scrap of leftover food from the restaurant never knowing like the majority of mankind that The Merk isn’t even attached to the hotel—were all smiles, crying tears of joy and indulging in long, emotional embraces in-between choruses of “Cumbaya.”

Eddie Kaen (right) and his staff share a moment of camaraderie directly following the airing of their episode of FOX's Hotel Hell.

Nobody cried more than Rutherford, who was overjoyed that Gordon had reignited the passionate inner flame that drove him to become a chef (and given him a traditional white chef’s coat to replace the gaudy bright red one he’d been forced to wear for the past half-decade). It was nice that the show ended that way—all warm and fuzzy. Hope, respect, new furniture, a new menu. How could things not go perfectly? Kaen and his staff took center-stage and shared a nice moment with each other before thanking everyone for coming and bidding guests adieu.

But where was Rutherford? All night long, I’d kept my eyes peeled for him. I was eager to ask him how he was adjusting to the new menu? What was it like to work with Gordon Ramsay? What were his plans moving forward? At first, I’d hoped he was merely pumping out all those dishes from the newly rejuvenated kitchen and didn't have time to make an appearance, but when he didn’t take a bow with the rest of the crew, it was clear he’d already exited stage right.

Turns out, Rutherford is no longer there. Digging turned up multiple reports. Depending on who you believe, he was either sacked shortly after the taping of the show, or decided he no longer wished to work there and resigned without giving a reason. Either way, the reality of the situation was a far cry from the neat happy ending televised to the nation. I guess a week of Hollywood magic can’t fix everything—but we all knew that already. 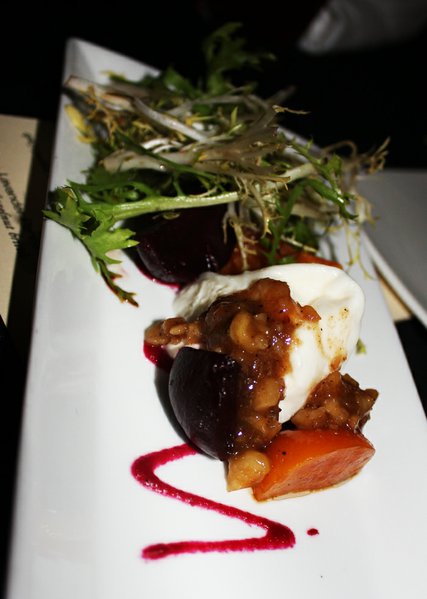 A beet and burrata salad off the new menu developed with Gordon Ramsay for The Merk Bistro.

Still, the rooms look better and the menu is much shorter (down from over 100 items to a single page of humble, more straightforward fare. I sampled a bit at the screening, but will reserve judgment for when I taste it in the restaurant. Buffet style (i.e., as-fresh-as-possible-from-the-chaffing-dish) is no way to experience food at its finest. It’s a start. But will it be enough? Only time—or the big Gordon-returns episode—will tell.

It's always interesting to see a business owner who knows nothing about his business. I'm curious - do you know if the restaurant management staff that appeared on the show (especially the manager who openly admitted he didn't favor the resto's food) still work there? Or, were they MIA like the chef?

I'm really not sure about that one. I often wonder about the repercussions for such openness are, as I'm sure that must be tough for a business owner to swallow upon review.

Brandon, no one from the restaurant is still there. All those folks who took bows are the hotel front staff. If you want a follow up before Gordon comes back talk to me, I'll even give you the reasons I left. P.S. It all depends on who you talk to and how you research a story, it's not like I left town.

Hey, any follow up on the story? I just watched the episode and am really intrigued about what happened after the show. Hope Brian left the restaurant to pursue a better path for himself, it seemed like the show had an actual positive impact on him.

Was there ever a follow up to this? It's strange how long it has been and still not even 1 more comment.