I’ve just popped across from the Park and Market trolley stop. Was waiting for the Orange Line. Heard sounds coming from this little place on the west side of Park Boulevard.

Oh yeah. Remembered this was the really great cellar that’s like a sushi-serving wine bar. It's far from the cool part of downtown, but all the cooler for that: Infuzon Sushi Wine Lounge (550 Park Boulevard, by the Park and Market trolley stop, 619-794-2421). 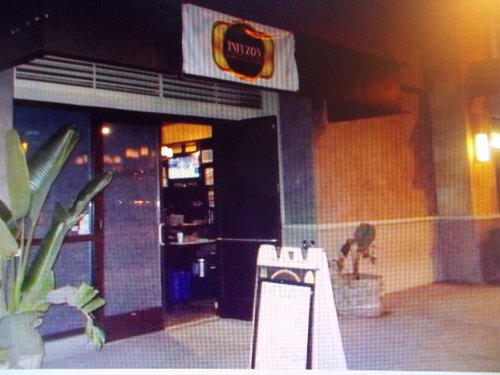 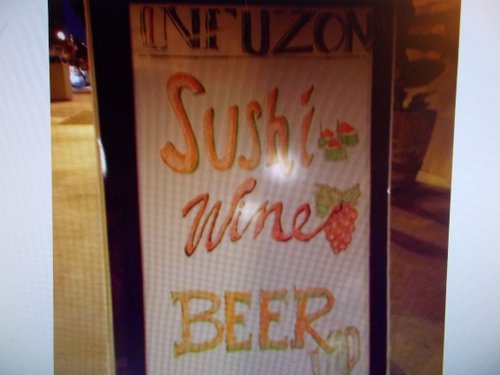 When I looked, the place was packed. Can never resist a crowd, so two milliseconds later, I’m inside.

And here, right behind the black marble bar is Brandon, the owner, hands flying, fighting squeaky-tight corks to get a bunch of wine bottles open. Remembered him from a month or so back.

"Have a glass of wine!” he says, like he really means it.

And now I think about it, I remember the beautiful house red – or was it the white? – I had last time, for five buckeroos.

Whichever, I get the house red this time (also $5), so fruity and smooth, and start talking with the guy next to me. Aaron.

At the end of the bar, Damian, the sushi guy tonight, is making an Infuzon roll (about ten bucks).

“Brandon let us come in and kind of take them over tonight,” Aaron's saying. “We’re the Jewish Federation of San Diego. This is our singles event.”

He says this last year the federation raised $6 million here in San Diego alone, for charities, mostly but not all Jewish. “We give a lot to food kitchens,” he says. “Nationally, the Jewish Federation raises about $6 billion each year for good works.”

Wow. That is truly astounding.

“Yes,” says Brandon. “Usually right now we’d have Thomas Jefferson Law School students competing to answer difficult legal court issues. Their profs come and lay out the questions. Case law, claims, anything in their courses. Whoever gets most points wins dinner on the house. Lots of cut-and-thrust arguments. You should come some Wednesday and watch. It's open.”

Then it hits me. Oh. Right. This is a private party. I take my last gulp of red. Says a lot for Aaron and Brandon that they didn’t kick me out.

I knew I liked this place for a reason.