So, Barbarella pretty much had the first and final word on the Snack Shack at the end of last year and I defer to her assessment as both accurate and concise. Namely, Carnitas' is pork-lover's heaven and there is some serious talent (in the form of Hanis Cavin, formerly of the Kensington Grill) in the kitchen. The place celebrates pork, and celebrates it well.

Now that we're down the road a little, it's worth taking a second look at Carnitas' because the miniature BBQ restaurant has managed to price itself into a fairly unique position.

I just tried the "poutine" the other day. It's not strictly poutine in the French-Canadian purist sense, but there's no doubt that the dish is excellent. With pulled pork, bacon, and white cheddar gravy ladled on top of seasoned french fries, Carnitas' poutine is a pretty lively interpretation of the classic Quebecois dish of fries, brown gravy, and cheese curds. 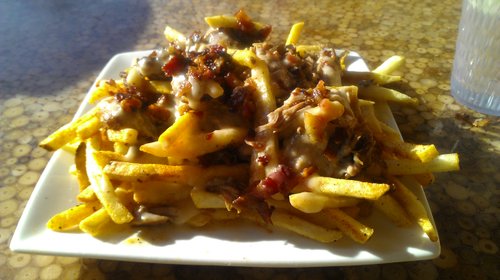 The radness of the poutine speaks for itself. But, here's the twist: it was only $8.

Were I, hypothetically speaking, to walk into any of the "craft-farm-to-table-sustainable-local" eateries that dot the Uptown landscape, I would expect to pay at least $12 for this dish. And I'd pay it, too. Not every day, but every now and again.

I look at the Carnitas' menu and I see that everything remains under $10, even after the place has been open for a little while and made its initial impression on a very fickle public. This is delightful. Perhaps the market for craft foods has gotten stable enough--now that everyone and his brother is in on it--that smaller players can enter said market and humbly occupy a stable position. Or perhaps it's simply that the minds behind the Snack Shack have enough faith in their product that they are willing to indulge a more long-term business model. If there's one thing that's been absolutely thematic in economic news from industries the world over, it's that faith in markets is sorely lacking since the beginning of the global financial crisis in 2008.

I'm willing to concede it's a bit of stretch to forecast economic recovery based on the price of porky at a diminutive store in Southern California, but it's not a stretch to point out the that Carnitas' menu is worth every penny and then some.

Soooo Weeee I'd like to see half orders (yeah for half price) so new folks could afford to try many of their offerings that they would not otherwise be able to afford!

Two comments:
1) Dude above me...really? Their prices are so cheap, I feel guilty! Skip a latte, bro. 2) Apparently Hanis is a genius. Can I vote for him for president?