A Visit to Cueva Bar

I hadn't been to Cueva Bar (2123 Adams Avenue) in a while. I paid a visit last night and I found that a few things have remained constant:

1) The soundtrack there is perpetually spot on. I don't claim to be an acoustic scientist, but maybe something about the way the PA is installed there makes the music seem loud and clear without drowning out conversation. The playlist is always good stuff, too, like a mix of Manu Chao and the Beatles.

2) Oz, the chef/owner, and company are still as friendly as can be. They are sincerely some of the nicest people working at a restaurant in this town.

I sampled a few newer dishes on the menu there, which remains divided into tapas, salads, and flatbreads like it always has been. From the small plates section I had an order of bacon and goat cheese stuffed dates ($6) and a "corn tapa" ($3). The dates, a riff on an extensively proven formula, had been caramelized much more deeply than they often are in this preparation. Because of that, much of the sweetness had given way to deeper and more savory flavors. That's a fairly sensitive piece of cookery and of the three dates on the plate, one had perhaps been taken just a touch too far and some of the sugars had started to burn, but the other two struck that fine balance just perfectly. 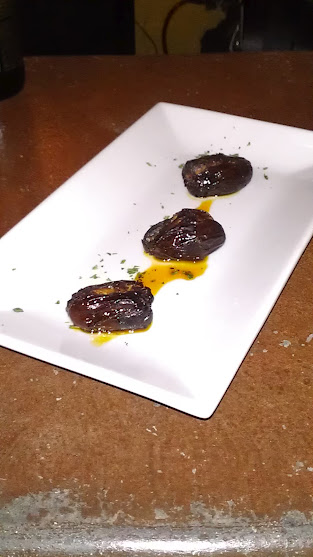 The corn tapa ($3) was an interesting dish. If pressed, I would say it most closely resembled a gordita, but the execution was more elegant. It was a masa dough filled with pulled pork and then lightly toasted. The pork wasn't overwhelmed by to much dough and the flavor of the roasted tomato sauce set off the entire thing very well.

A newer flatbread called the "BST" had bacon, spinach, and tomatoes on it. Sized for one, the dough was very chewy, but not tough, and the tomatoes seemed to be of good quality--we must be getting into summer! It was, overall, a generous pizza with lots of bacon and cheese.

I have yet to visit the restaurant for brunch, which is served only on Sundays, but I think that may be in the near future for me.